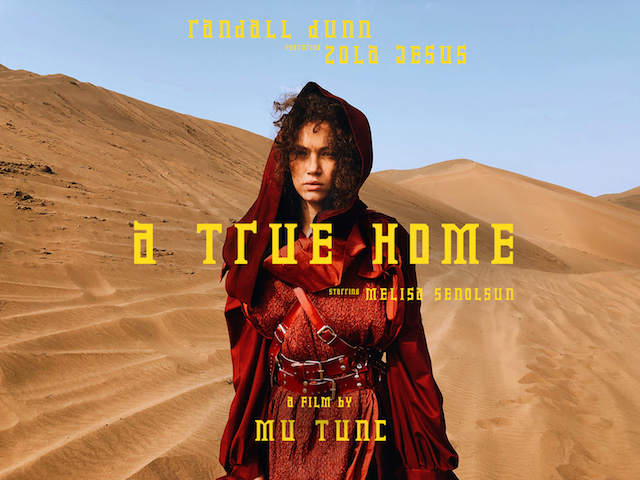 Randall Dunn, the musician, producer, and engineer renowned for his work with Sunn0))), Tim Hecker, Cloud Nothings, and many more, has just released his debut solo album Beloved on vinyl and digital via figureight. In conjunction with the release Dunn has shared a new short film by Turkish filmmaker Mu Tunç set to the album’s closing track “A True Home,” a spacious, cinematic sonic meditation featuring a soaring vocal performance by Zola Jesus. “In this film, I wanted to take the viewer into a surreal journey where the whole story reflects the hallucinatory feeling of the song,” states Tunç, who shot the film in the Oman desert with approval from the government. The film features a captivating performance by internationally renowned Turkish actress Melisa Şenolsun.

The film is based on a reoccurring dream I had this past year of a woman walking through the desert in search of water. Longing reds and browns set against the deep sun. I conveyed this idea to Mu, who went deeply into the concept in a way beyond what I could have imagined,” states Dunn. “The song is about the realisation that the journey to find ‘self’ begins and ends at the same time and that this realisation occurs when true presence is embraced.”
The lyrics for “A True Home” are based on a Zen death poem from the 1600’s and are performed by Zola Jesus. Speaking on the collaboration, she says “I met Randall for the first time about a year ago. As soon as we got to know each other we connected deeply, sharing so much common ground on both creative and personal levels. I was so honoured when Randall asked me to sing on this song, because not only am I huge fan of his work, but this song in particular held great meaning for him and thus me as well.”
Beloved is a seven song meditation on “anxiety, paranoia, different shades of love, different realizations of mortality, how it can make you feel the stages of your life more deeply.” Written in the wake of a turbulent period of change and loss, the celebrated producer shifted his knack for emphasising the human component of music toward mining emotional resonance from the subtle details and textures generated from early digital and analog synthesizers. The gentle encouragement of Eyvind Kang and Jóhann Jóhannsson, and affirming creative contributions by collaborators Timm Mason, Frank Fisher (Algiers), and Zola Jesus were all crucial to the birth of the album.
DEBUT SOLO LP BELOVED OUT NOW ON FIGUREIGHT
WATCH THE VIDEO FOR “SOMETHING ABOUT THAT NIGHT (FEAT. FRANK FISHER)”
Beloved album art by Stephen O’Malley
BELOVED TRACK LISTING
1. Amphidromic Point
2. Lava Rock and Amber
3. Something About that Night (feat. Frank Fisher)
4. Theoria / Aleph
5. Mexico City
6. Virgo
7. A True Home (feat. Zola Jesus)
https://www.figureightrecords.com/

WARISH premiere video for “Bleed Me Free” from new album- on tour now!