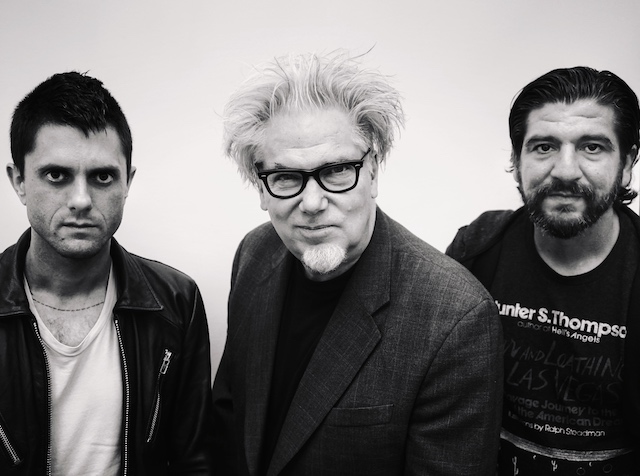 Photo of Planet B by Becky DiGiglio

About the Joana Lopes directed video, Justin Pearson explains: “The lyrics to Come Bogeyman are open for interpretation. But the root idea that I was heading towards was the lack of humanity we see in modern times, but from an inward prospective. I’m not here to complain or point the finger. The idea was that I was a mistake and wasn’t planned, therefore I was bound to be flawed. But there is also the idea of social, economic, and political environments that also direct or shift us in out time in this world. As for Martin’s contribution to the song, Luke actually took Martin’s drum tracks from an improv session that he and I did before Planet B was even a band, and wrote around it. Once the song started coming together, it certainly held the vibe and feeling got from Martin’s work that I grew up on, which seemed fitting and natural. Lastly, Joana Lopes who directed the video managed to show another spin on what I had tried to give to the song, showing the end of life, as a rebirth, where the main character leaves death and travels backwards. However, the character may have failed at the end of the video depending on how you look at it..”

Planet B is the collaboration of Justin Pearson (member of The Locust, Retox, and Dead Cross, and founder of Three One G Records) and producer Luke Henshaw. Pearson’s electrifying vocals meet Henshaw’s sonic feast of hip-hop, industrial, and film score influences. The sound transcends genres: dark, heavy, urgent, and anthemic, it is equally relevant in the contexts of hardcore punk and hip-hop.

“[Planet B] applies an electronic edge to the grindy noise freakouts of Justin’s other bands… A new musical direction.” – BROOKLYN VEGAN