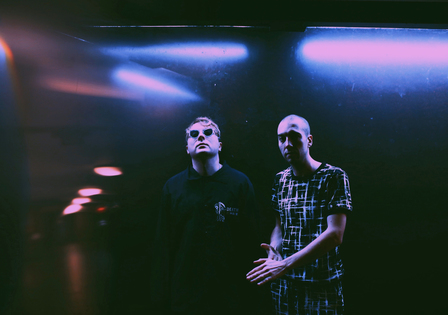 “Urgent and commanding” – The Guardian
“Lusts take their cues from new wave, with glimmering synth lines piercing through urgent swathes of guitar” – NME
“Entwined with subtle 80s infused synths and eerie vocals, Lusts “lost highway” is a liberating dark pop track that’ll have you focused on the open road.” – The Line of Best Fit
Lusts, the recording pseudonym of brothers Andrew and James Stone, are returning with their brand new LP ‘call of the void’ + lead single ‘true romance’, out November 16th.
They’ve released their brand new vertical video for single ‘true romance’, of which they’ve said “We are a band that has always enjoyed playing with the balance between the future and the past. We have a complex relationship with technology, but sometimes you have to step back and admire how much you have access to with the phone in your hand. It’s Pandora’s Box, and it’s not going anywhere. That is something we wanted to explore on the ‘true romance’ vertical video. We filmed it all on iPhone, and edited it with Glitché. We wanted to challenge ourselves. We also wanted the footage to literally break apart at the seams and go molecular…as we start to enter the void.”
Their self-recorded and self-released LP has a diverse palette of sonics and themes, having been inﬂuenced by the endless motion of the city, otherworldly nights, and brutalist architecture. It’s a utopian and romantic record; Lusts are more interested in being part of a developed and progressive future than being caught in a dystopian mire. The album is hopeful rather than despairing, but there are also explorations of darker themes.
Utilising the haunting, reverb-drenched production of classic 80’s post-punk as well as the glistening sheen of the iconic synth-pop the decade is so famous for, Lusts explore a rich soundscape of Lynchian ambiance amongst their poppier hooks. There’s a layer of experimentation here too, whether it’s Andy drawing from the themes of Jean Baudrillard’s America for the single ‘lost highway’ or James introducing a rhythmic pattern by tapping pint glasses, inspired by Steve Reich’s minimalistic approach, for ‘joy in a joyless place’.
In 2015, Lusts announced their arrival with the instantly infectious single ‘Temptation’ with 1965 Records, winning Steve Lamacq’s Rebel Playlist and followed by acclamatory features for their debut album ‘Illuminations’ in the likes of The Guardian, Q Magazine and NME. Huw Stephens later premiered the album on Radio 1, with the title-track playlisted on BBC 6 Music. They have since toured extensively including Barcelona Razzmatazz, a festival slot at SXSW and a triumphant headline at London’s Electrowerkz.
Live dates:
Shacklewell Arms | London | 22nd Nov
Eagle Inn | Salford, Manchester | 29th Nov
Broadcast | Glasgow | 30th Nov
Leicester | Dryden Street Social | 1st Dec
Tickets available from here: http://www.lustsmusic.co.uk/live
Album pre-order:  http://hyperurl.co/Lusts-CalloftheVoid
http://www.lustsmusic.co.uk/