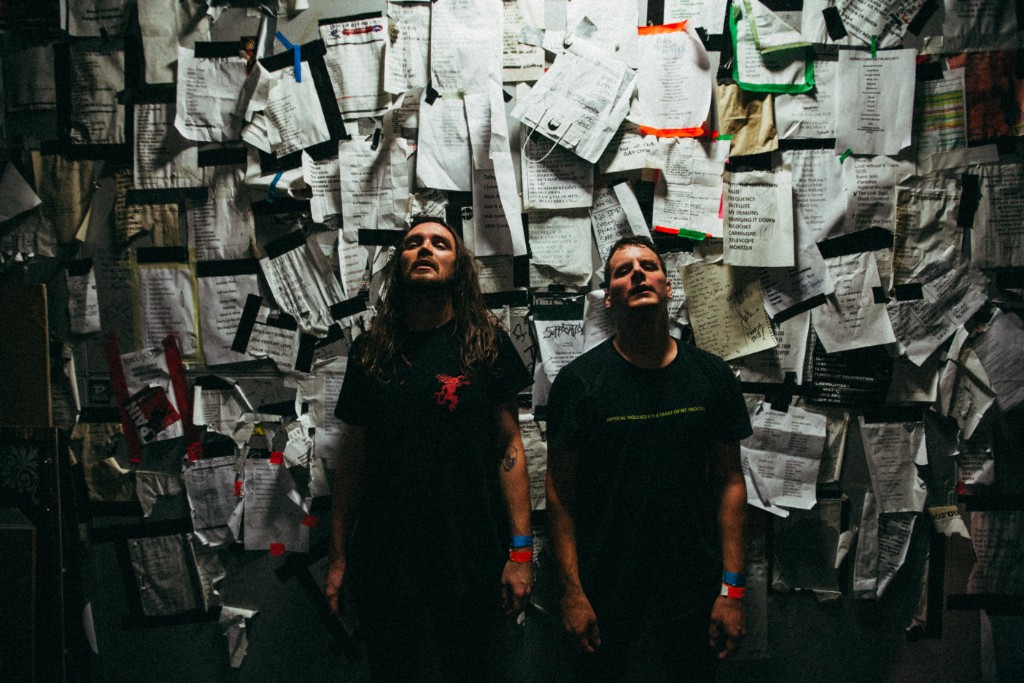 From this year’s ‘Challenger’ album, out now on Earache Records

UK Tour kicks off this week

“this debut hits you with an ear-damaging line of fuzz, with riffs so dirty you’d be forgiven for thinking they’d just done a Tough Mudder course.” – Kerrang! KKKK

Haggard Cat have spent most of their year on the road or at festivals (or playing on top of shipping containers at festivals). Now Halloween sees the band head off on another UK stint, playing 14 shows across the UK and Ireland as part of the Upset About To Break Tour with Drones, Bitch Falcon & Intechnicolour.

The Nottingham duo’s riff-heavy rock and roll was unleashed in the form of their album ‘Challenger’ earlier this year. ‘Goldberg’ is one of its songs and the band have this week released a music video for the track. Vocalist and guitarist Matt Reynolds says “With this clip we wanted to try and visually recreate the head-spinning sound of the track’s weird mismatching time signatures and dreamy vocals. To get the final effect we ended up hand-building a room within a room and cramming in as many references to the band’s life over the last couple of years as we could. I also think this feels like a good natural way to tie together everything we’ve achieved so far with ‘Challenger’. There are quite a few references to our other videos in there that are fun to try and spot too.”

This is a timely release for Haggard Cat as they are about to embark on another tour and ‘Goldberg’ is inherently about the toll touring can take. “’Goldberg’ is a very personal song to us,” says Reynolds. “The lyrics deal with how touring and expectation cause deterioration of mental health and how our perception of ourselves on the road can lead to toxic behaviour. Although this might sound quite reflective, it’s actually a very positive song about being more self aware and pulling through to the other side.”

Haggard Cat (whose line-up is completed by drummer Tom Marsh) have a history of crafting creative DIY music videos, as evidenced by other visual offerings from the ‘Challenger’ era – ‘Bone Shaker’, ‘The Patriot’ and ‘American Graffiti’. These killer tracks have enjoyed national airplay on BBC Radio 1’s Rock Show and BBC Introducing, as well as playlisting at Kerrang! TV.

UPSET ABOUT TO BREAK TOUR:
Tickets