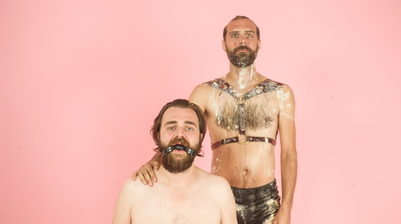 “File between Slaves and The Amazing Snakeheads in a ‘worst dinner-party music’ playlist” – NME
“Extraordinarily engaging, sometimes reaching Monty Python-esque levels of sheer lunacy, but to dismiss the Croydon-based post-hardcore power duo as a mere comedy act would be superficial” – The Independent
“Croydon duo don’t hold back” – Clash Magazine
Fiercely independent and courageously unique Croydon-based duo Frauds have released their brand new video ‘Animals’ directed David Emanuel Altweger. The single follows their previously well received debut album ‘With Morning Toast & Jam & Juice’, an epic amalgamation of blisteringly heavy guitars and wry, satirical lyrics.
Of the video they tell us; “How many ways can one be fucked? In this video we wanted to get physical by making something that’s visually beautiful that pushes us and our audience into real visceral reactions. Exploring the world of Kink was a lot of fun, we really went to some extreme places while putting this together. One of the main lyrics in the song is “running through the wheat fields” which is apparently the naughtiest thing our prime minister has ever done. With that in mind it felt like the right thing to do was something a bit naughty and provocative. It comes from a place of love and we want to entertain people with our art and if that means pouring a whole bottle of full fat coke down our pants then we are willing to do that!”
‘Animals’ may just be their most political track to date, pointedly tearing down the absurdity of the current regime in a way that will make you laugh, if even in frustration. Utilizing their well-honed recipe of call-and-respond duel vocals that strain over layers of pedal distortion and a forceful beat, they create an immediately engaging pace that refuses to let up. But don’t for one second mistake this for mere unharnessed aggression, the playing is airtight throughout and never hinders their ambitious and rallying message.
A live phenomenon that any UK live-circuit regular will know, Frauds have built a reputation for their comedic and brotherly stage-personas, often pausing between (or mid) tracks to banter with the crowd and each other. Alongside their joint passion for stand-up is their other non-musical influence; their hometown of Croydon – as local boys, they’ve spent their lives growing up heavily involved in the multicultural London landscape around them.
Since their inception in 2012 (started earnestly playing covers in a garage after previous near-successful projects), the then aptly named Frauds had no idea what they were doing would go on to spawn something of a musical staple. Through their now established yearly South-London festival ‘Sunburn’, they’ve created a scene around bands such as JOHN, Melt Dunes, Youth Man and more. They’ve gone on to support personal heroes Future Of The Left as well as Reuben frontman Jamie Lenman, and this year they could be found on the bill of 2000 Trees alongside the likes of Bloody Knees and Demob Happy.
‘Animals’ is the first release of a new era for the band, with their impeccable debut behind them they’re working on crafting new material, exploring bigger sounds and meatier subjects in which they can sink their teeth. In a world where artists should be striving to make a difference and shine a light on the issues that surround us, Frauds join current contemporaries Idles and Shame as a confident outfit putting themselves out there, and as a fearsome live band with something to say. Even if it’s said with a wink and a smile.
Follow Frauds:
Facebook