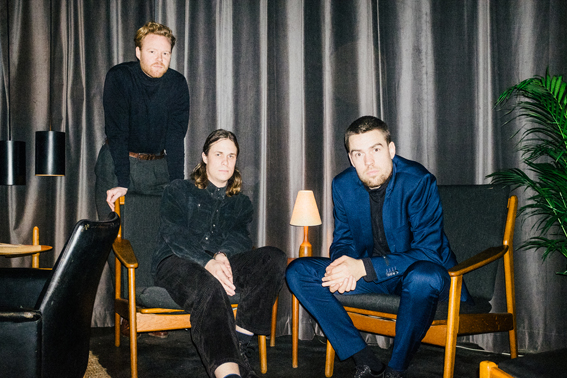 “a hard-glam charge of desperately sung, melodically certain pop with a vocal gleam that suggests that English New Wave school of gloom – the Buzzcocks, New Order, the Cure – with early-Nirvana surge.“  Rolling Stone

“as excessively explosive as it is dynamic and experimental.” The Line of Best Fit

“’Joaquin’ is a dynamic track, surfing from melodic shoegaze riffs into contemplative break downs, replete with production tics that show ingenuity and add momentum to The Entrepreneurs’ unstoppable aural dash.”  The 405

“a band that should be on your radar.” Everything Is Noise

“a whirlwind of sound, texture, and emotions.” The Revue

The Entrepreneurs, a trio from Denmark who recently signed with Copenhagen-based label Tambourhinoceros (Palace Winter, Pardans, Molina etc.) are set to release their debut album Noise & Romance on 1st February 2019.

Today they share their latest single, “Say So!” The energetic track kicks off on a high note and ends even higher as Mathias Bertelsen’s vocals are supported by all kinds of percussion as the track comes to an end.

The video underlines the song’s energy with a seemingly gloomy social get-together ending in uncontrolled dancing: “The “Say So!” video shows some of the madness featured in both the music and the lyrics. It’s a surreal story about being controlled by your emotions without having any control of your body and mind. The lyrics are about having your back against the wall and having existential doubts on who you are as a human being. In the same way, the video exhibits a group of individuals in a civilised setting broken down to the bare essence of the human being. We thought it would be interesting to use the fierce drums in interaction with these animal-like and reckless individuals,” Anders Hvass explains.

After touring extensively with their debut EP, the trio gained a reputation as one of the fiercest live bands in Denmark, bringing their aesthetically rich and experimental variations of punk, grunge and post-rock to both Denmark’s venues and festivals including Roskilde, Spot and Reeperbahn. The band will be playing at Eurosonic in January.