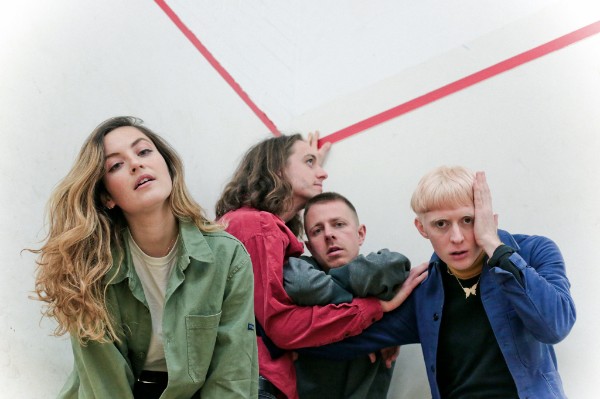 “…an unmistakably beaut bop.“
– Wonderland Magazine“…infectious melodies and harmonies that shimmer with a glorious pop sheen.“
– The Line of Best Fit
For Fans of… Everything Everything, Superfood, Our Girl

Acclaimed softcore-psych group CHILDCARE return with the release of their eclectic new single Bamboo, out now via Big Indie Records.

Bamboo is the first of its kind for the band, with Emma Topolski (bass) taking the reins as lead vocalist instead of usual frontman Ed Cares. Talking about the decision, Emma elaborates, “Ed already had an idea for the chorus but wasn’t sold on the verses, so I did some soul-searching and came up with “I wanna be someone else”. We finished it together in my kitchen over a nice cup of Lady Grey. It was very good of him to step aside and let me take lead vocals on this one; this is CHILDCARE taking on another dimension.” Bamboo maintains the quartet’s unique ability to create skewed psych-pop complete with bombastic guitar riffs, world’s-strongest- man drums and effortlessly flawless harmonies. Emma’s vocals are served over a roaring triple decker soundwich; a brawny guitar/bass/drums triptych that tastes a little like Our Girl smothered in gooey Everything Everything sauce.

CHILDCARE were formed in 2016 by Ed, formerly one of west London’s most in-demand male nannies. Ed enlisted local musicians Emma, Rich Le Gate(guitar) and Glyn Daniels (drums) to complete the group and two years on, the band have made some serious waves across the continent. They have played with the likes of Bastille on their recent arena tour and already released two critically acclaimed EPs with extensive BBC Radio 1 support. They have also had wide-spread blog coverage from the likes of The Line of Best Fit, Clash, DIY and Indie Shuffle to name but a few. With Bamboo, CHILDCARE continue to spread their idiosyncratic sound far and wide, watch out world!

Bamboo – taken from the band’s forthcoming debut album, due in February 2019 – is out now via Big Indie Records.

THE GOTOBEDS announce Debt Begins at 30 due 31st May on Sub Pop, and featuring guests inc members of Pavement, Protomartyr, Downtown Boys, Shellac