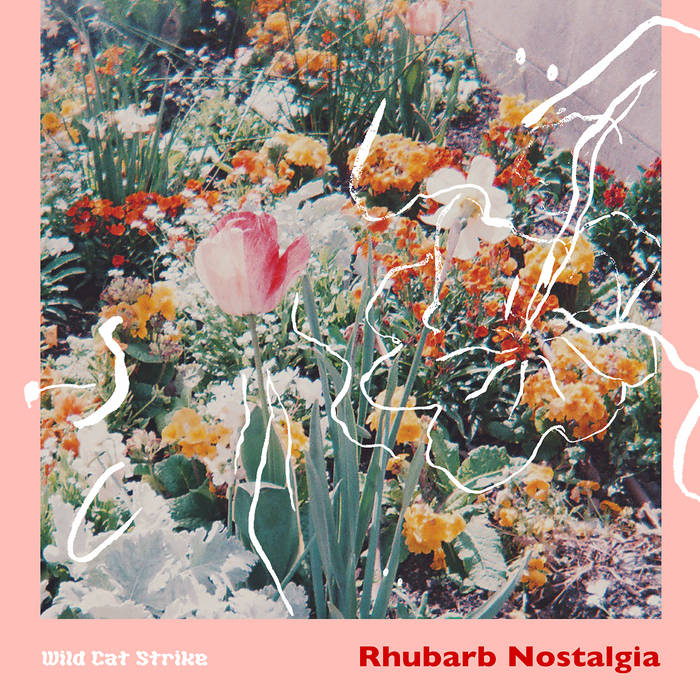 OUT NOW VIA SMALL POND RECORDINGS

On their full-length debut, ‘Rhubarb Nostalgia’ (out 5th October via Small Pond), Brighton four-piece Wild Cat Strike channel their gleeful sense of cacophony and flair for sonic abrasion into an engrossing album of off-kilter indie pop songs that hook hard on the heartstrings as they crisscross in and out of chaos.

Wild Cat Strike have developed their formidable sound via a slew of live shows (including sets at 2000 Trees and Y Not, and support shows for the likes of The Xcerts and LIRR) and a handful of EP and single releases, in which they have ventured from frenetic punk/noise experiments to huge instrumental soundscapes in recent years. Now, while overtones of these intense, post-rock roots remain – with squalls of distorted guitar, dynamic switches, and raw and flowing melodies – the band have alighted on an energetic, succinct and fresh songwriting style.

Singalong hooks and feelgood harmonics make for a moreish listen, as the poetic lyrics of frontman Danny Byrom deliver candid, caustic and witty ruminations on life, death and memory. Byrom’s lead vocals and guitar are joined by Max Boughen on guitar and violin, Chris Whitehorn on bass, and powerhouse drummer Joe Caple. The instinctive and intimate feel of their new album comes from proudly recording and producing it themselves, the core band members making themselves at home in the Small Pond studio and occasionally inviting friends round.

On several tracks, they enlisted former band-member Guy Jones to improvise on slide guitar, honky-tonk piano and organ, while label-mate Natalie Evans’ backing vocals on a handful of songs bring an affecting emotional richness. Finally, several fellow Brighton musicians (members of Delta Sleep, InTechnicolour and Tall Ships – collectively named by Byrom as the “God Damn Gospel Choir”) piled into the booth to lay down jovial and raucous gang vocals, a distinct feature of the album’s warm, lively sound. External influences on the record range from the atmospheric mastery of Godspeed You! Black Emperor to Modest Mouse’s vocal treatments, to the eclectic indie outsider flavours of Conor Oberst, Dan Deacon, Pavement, mewithoutYou and Anathallo.

From haunting and sombre beginnings, album intro “Self Help Tapes” blooms into an exuberant melodic release that carries straight on into“Lemonade”, the Wild Cat take on a ‘50s style waltz song, dreamy and romantic in parts, yet eerily uncomfortable and unfamiliar and laden with manic percussion – a switch that reflects themes of psychosis and the inability to understand reality. Hypnotic in its catchy simplicity and driving rhythm,“Sickle Cell” makes grin-inducing use of the gang vocals, before the pent-up suburban ennui of “Satellite Towns” explodes into the sidelong smirk of“I Feel Good”. “Thirsty Ocean” is Byrom’s slant on a nursery rhyme, its minimalistic lyrics packed with vivid imagery while a varied chatter of vocal tones and layers upon layers of guitar add a questing, melancholic ache to the record’s mid-point.

Through this murky mist charges the dirty great electric guitar intro of “Everyone Feels The Same”, a track that flits from dark and grizzly verses to an unhinged levity and cheeriness. Irony and self-reflection continue on “Good Looking”, described by Byrom as “a dumb pop song” although its “Woo-ooh” refrains and catchy lines are soon engulfed by swathes of guitar and a distinctly un-pop unpredictability.

The title track is a microcosm of the LP and a climactic culmination of all the elements at play – cycling between delicate, vulnerable beauty and dramatic instrumental outbursts. The reflective lyrics, in Byrom’s words, tell of “questioning false memories, and being optimistic about one’s pessimism”while the guest vocalists all come out in force to push forward the emotional impact. Rubber-stamping the final sense of acceptance and tentative optimism, “Another Round” provides the epilogue, as the band strips right back to just the core quartet of musicians. “The album is done, the bar is dry, we’ve talked ‘til our jaws are as tired as our ears, but what’s really been resolved – has it been therapeutic or cathartic, or just the tuneful ruminations of someone who’s got nothing else to talk about?” muses Byrom, of the song and the album itself, before concluding: “What the hell, man, let’s just get one more drink, it’ll all be alright. Just a couple more drinks. Everything’ll be good”.