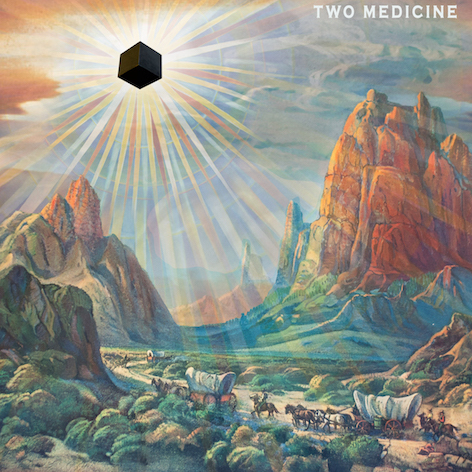 On tour with John Grant this Autumn

With the release of his debut album Astropsychosis due next month, Two Medicine, the solo project from Midlake’s Paul Alexander, has today shared an acoustic version of the previously released single “Gold”. The video featuring Paul Alexander and vocalist Aimee Adams, whom will tour as part of Two Medicine this fall, fades between a studio and a forest setting and is, according to Alexander, about “how our ancestors still influence us”

“I’d always wanted Midlake to experiment more with the arrangements, or to get more into psychedelic textures,” says Paul Alexander, the bassist from Denton’s prog-folk voyagers. Those ambitions are fulfilled on Astropsychosis, Alexander’s debut album as Two Medicine, released via Bella Union on 2nd November and available to pre-order here. Richly ambitious in its sonic colour and conceptual reach, Astropsychosis is an album of luminous space and mindful grace, its depths and details coaxed into orbit with the lightness of an artist in his element.

As Alexander explains, one key to its secrets lies in the project name’s nod to a national park in Montana: “Two Medicine is a majestic place, without spoil. The land was ceded to the nation by the Blackfeet tribe. They were likely coerced into the deal, like most of the tribes who gave away their land. It is wild, humbling and probably collateral for the nation’s debt, where an inevitable capitulation looms. Beyond its geographical location, to me, the name Two Medicine represents a summation of this irony, whether created or inherited by the people of the United States.”

Hints of these thoughts emerge on “SF”, where mellifluous chimes, multi-tracked chorales, warm keys and a dream-pop bass-line provide warm bedding for a lamentation of something lost, the cost of such suggested in deathly images. If it seems like an enquiry into the high price of spiritual neglect, such is Paul’s intent: “One of the central themes is material and spiritual consequence, for myself, the US, and the world as a whole.”

“Oblivion” picks up the thread of dread with its haunted harps and misty vocals framing references to sacred summonings and bloodied swords. Sunshine keys and dreamy rhythms counterpoint reflections on darkening times in “Will Not”, while “Gold” is a glistening beauty, laced with rays of hope; “An Eye for an I”, meanwhile, revisits themes of consequence over sci-fi synths and a scudding space-pop bassline.

While the title-track sees the crimes of an unnamed “dope” held to account, the dreamier “Kuopio” points to mindful ways of living, humbled before nature and open to mystery. If hope is suggested therein, it’s a theme revisited on “tmrw”, which steers the album full circle: from its opening reflections on things past, to a tentative glance at the future. “Tomorrow,” Paul asks, “what then?”

Alexander began facing his future in January 2016, after a year-long break from music following Midlake’s tour for 2013’s Antiphon. “I wanted to find out if I could write songs and if I could sing them – basically, whether or not I could make an album on my own,” he asks. Over 15 months of writing, arranging and recording (in Midlake’s old studio in Denton), he got his answer. From the early reference points of Pet Sounds, dream-pop and pre–Dark Side of the Moon-era Pink Floyd, Astropsychosis blossomed into a very modern exploration of sound and psychedelia, bright on top and burning with purpose below.

Having played a key creative role in the recording of John’s Grant’s new album, Love Is Magic, Alexander will be joining his labelmate on his European tour this Autumn. Two Medicine will tour as a duo, with vocalist Aimee Adams making up the numbers. Dates / info below:

Astropsychosis will be released 2nd November via Bella Union