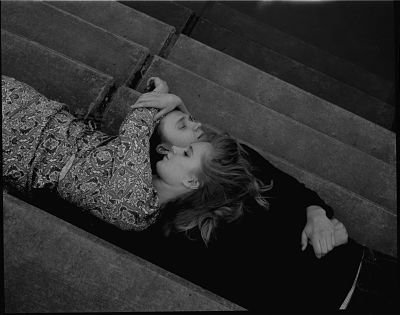 Lead by sibling duo Catherine Marriott and Robin Christensen-Marriott, Oxford band Catgod return to grace our ears with another utterly immersive new release. Following the success of last single Keep My Promises, Sleep In is out now via Could We Could.

Inspired by the turbulent feelings of mistrust in a relationship, Sleep In is propelled by luscious sweeping flute melodies and the subtle, effervescent power of Cat’s soaring vocals. As a shimmering emotion-strewn splendour is created, it interweaves the exquisite harmonies of siblings Cat and Robin with folk-inspired layers of instrumentation. A truly spellbinding soundscape, with shades of the twinkling musicality of the likes of Lamb or Beth Gibbons. Of the track, the band explain: “It’s about the turbulent feelings you have in a relationship where you don’t quite trust the other person. It’s about wanting to stay in bed with them all day but also having nightmares about them with other people.”

Formed when Cat and Robin started singing together when Cat moved back home to Oxford from London, Catgod was created as something positive to focus on during a time of change. The siblings’ connection is evident in their intuitive partnership on stage, and over the last year Catgod have charmed crowds at Truck Festival, Cornbury Festival and many Sofar Sounds showcases. They have also received acclaim from the likes of The Line Of Best Fit, Clash Magazine and both Lauren Laverne and Tom Robinson on BBC 6 Music. Now, with their beguiling and innovative fusion of sounds, they hope to continue captivating listeners with the sparkling grace of Sleep In.

Sleep In, the new single from Catgod, is out now via Could We Could.