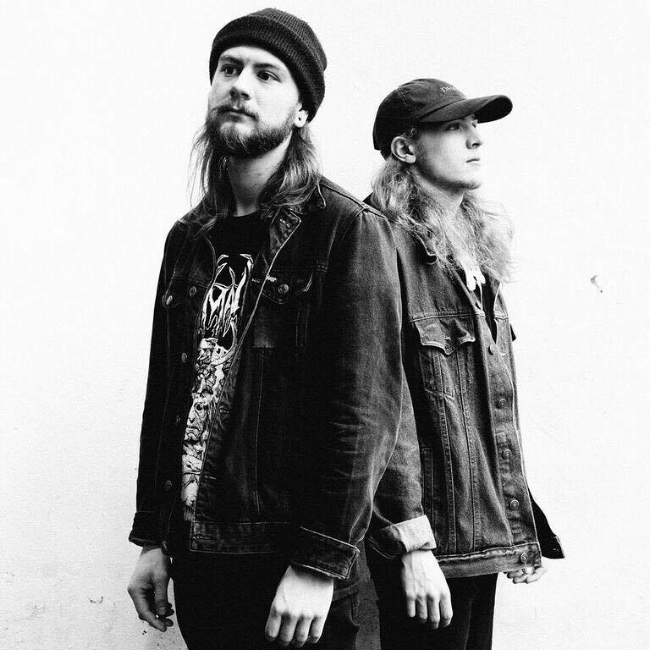 The Tide, Beneath, The Wall is released on 7th December 2018 on Riff Rock Records

Signed to Riff Rock Records – one of the UK’s leading purveyors of sludge, doom and stoner rock – Tuskar return exactly one year on with The Tide, Beneath, The Wall, their eagerly awaited follow-up to 2017’s earth-shattering EP, Arianrhod.

Still relatively new to the fold having only formed in 2016, for vocalist/drummer Tyler Hodges and guitarist Tom Dimmock, The Tide, Beneath, The Wall marks a significant shift in perspective for Milton Keynes’ most sulphurous “nuclear sludge” duo. Recorded at The Cro’s Nest studio by Slabdragger’s Sam Thredder, their latest EP grants a sea change in scope and sound, which, over three chapters captures punishing progressive sludge and savage, sub world vistas. Soundscapes shaped by moments of dark brooding doom and relentlessly riff-heavy and psychedelically charged movements.

For Hodges and Dimmock the chemistry they share is unshakeable, both live and in the studio having grown up together listening to the likes of Conan, Sleep, Behemoth and Darkthrone. Still in their twenties both bring an unmistakable energy and ferocity that could potentially mark Sludge Metal’s future as forever theirs.

The Tide, Beneath, The Wall is released on 7th December 2018 on Riff Rock Records

More shows; but yet to be announced.