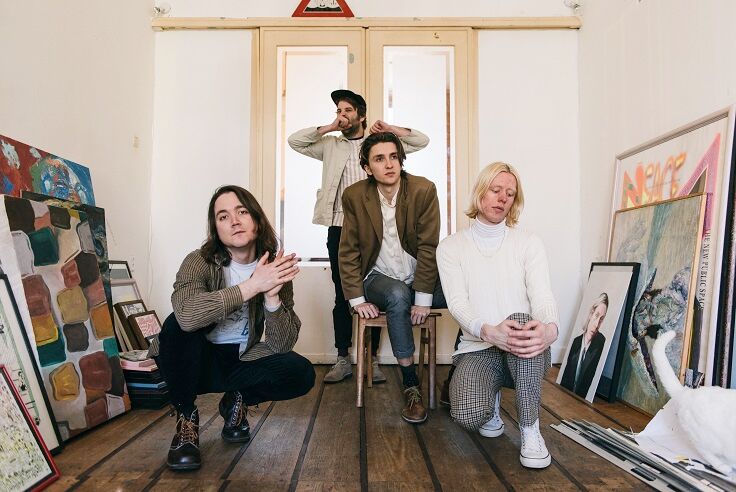 “New single ‘If I’ is a righteous guitar melter, a sort of fuzzed out Dinosaur Jr. riff attached to a sunshine pop song, driven by helpless adolescent fantasies.” – CLASH

“…like something that might waft out of a California garage in the 1960s…sunny, crunchy, extremely catchy.” – NPR Music

Netherlands four-piece Mozes and the Firstborn have announced that their new album ‘Dadcore’ will be released on January 25th. As the next taster after previous single, ‘Hello’, the band have released a brand new single ‘If I’ produced by Chris Coady (The Fall, Yeah Yeah Yeahs, Beach House), along with a video to accompany it which Clash described as “a lo-fi shoot that recalls gritty VHS while sluiced with outrageous colour”.

California’s Burger Records were the first to jump onto the addictive, raw energy of Mozes and the Firstborn, releasing their debut album in 2014. Since then the band have had praise from the likes of Pitchfork, NPR Music, Noisey, released various singles on Universal B.V. and played countless SXSW shows, winning fans across the world.

Songwriter Melle Dielesen explains the meaning behind the new single: “I see ‘If I’ as the counterpart of our last single ‘Hello’, which was about going into the world and claiming your space by simply letting yourself be seen. ‘If I’ is about everything you do not want to show the world; all the things that you regret. This can be a certain emotion you have, a choice you’ve made in the past, a secret love that you’ve never been able to share with anyone else but yourself.”

Ask an average 15 year old kid nowadays what rock music means to him and they’ll probably say: “That’s something my dad listens to”. With ‘Dadcore’, Mozes and the Firstborn embrace this sentiment by exploring their favorite styles within the paternal genre. The band present the record as a mix-tape, a colourful collection of eclectic songs that they’ve hand chosen and want you to fall in love with and pick out your favourites, like any other mix-tape. The production of each song was approached differently to highlight the wide influences on the album. Melle Dieleson explains the love behind their music:

“Dadcore is a love letter to rock music. It’s an ode to being in a band. After eight years we still sometimes play shows where only twelve people show up, there’s no backstage and the fee is a case of beer and a place to crash. Nonetheless, there’s four people up on that stage rocking out as hard as they can. That’s Dadcore to me.”

Dadcore was produced by drummer Raven Aartsen with Chris Coady (Beach House, Yuck, together PANGEA) on board as co-producer. On this third record the band has worked with different mixing engineers including Chris Coady, Rob Barbato (Kevin Morby, The Babies, The Fall), Roland Cosio (together PANGEA, Fuzz, Peach Kelli Pop) and Andrew Schubert & Eric Carlson (together PANGEA, Mean Jeans, Wand).

The band have been performing around Holland on and off throughout 2018, with three dates across Europe coming up: one with Canshaker Pi, one supporting Mattiel in Paris, and one in Berlin for Rood Woof Records Halloween Party with Disgusting Beauty.