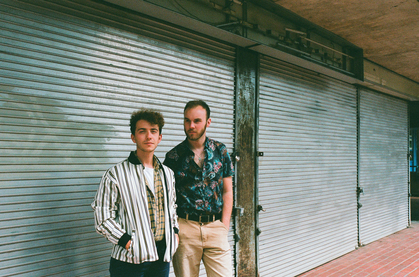 Little Grim
New single ‘Silence’
Out Now
Following a successful string of single releases, South London indie-pop duo Little Grim have returned with ‘Silence’, their unforgettable new track that fuses their penetrating lyricism and psychedelic riffs with infectious, floor-filling beats.
‘Silence’ is a hazy slice of smooth dream-pop about the pressures of modern life, Joe Murphey tells us “I’ve lived in and around London all my life, but it wasn’t until I started trying to make a name for myself there, working jobs and playing gigs, that it fully revealed itself to me. The city is full of noise and a constant pressure to try and make money, and you can’t escape the feeling that everyone else is handling it better than you are. You find yourself hit by a wall of fear and anxiety thinking of the morning commute, the squeal of the tube train wheels, the crush of bodies in each carriage, and I find myself craving a moment of serenity.
It makes me wish I was by the sea.”
The stunning visuals that accompany the single echo this, seeing a day through the eyes of a London teen fighting back against a cheating partner and predatory commuter aggression, making for a dark watch but one with a particularly empowering message.
Collaborating in the studio with producer, Brett Cox (Jack Garratt, Tusks, Vök), the band have pushed their production into a surprising new territory that takes the nostalgic vintage swagger of their first records and laces it with electronic beats and relentless bass lines.
Little Grim came together after singer Joe Murphy and guitarist Jeremy Barclay met in a secondary school jazz band, and discovered a shared love for making quirky, off-the-wall indie tunes. Since then, a run of single releases since 2014 has seen them hone their songwriting into the mature form it takes today. They’ve shared stages with the likes of Husky Loops and Rat Boy, and with an upcoming EP, as well as regular live music and club nights they promote themselves in Peckham, they are ready to make their unique mark on the alternative indie landscape.
Live Dates:
11th October – Bermondsey Social Club – The Single release party – Bermondsey
Follow Little Grim:
Facebook
Website