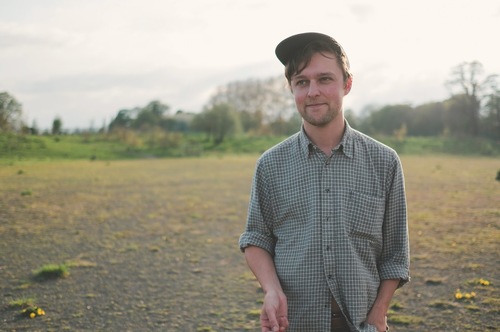 Experimental folk songwriter and Northern Irish Music Prize winner Joshua Burnside returns with reissue of his 2013 EP, If You’re Goin That Way, which has been reconstituted and embellished in to a deluxe package called Wear Bluebells In Your Hat If You’re Goin That Way, (a line from lead single “Black Dog Sin”). It is due out via Quiet Arch on 11 January 2019 and in addition to the five original tracks, there are four brand new songs and an acoustic version of “Desert Wine”. The album will be available digitally and as a limited edition hand stamped deluxe heavyweight vinyl package. He will be hitting the road before the end of the year with two London shows – at The Waiting Room (22 Nov) and Paper Dress Vintage (9 Dec) as well as an extensive tour of universities doing free student only “coffee house sessions”.

The EP features the single “Black Dog Sin” (originally released in 2015), a darkly, waltzing folk ode that cunningly culminates in a raucous peak and final sleep. It is the sonic equivalent of peering through the keyhole: a cloistered, almost voyeuristic taste of an inimitable brand of experimental folk that is very much in the process of growing into itself. He teamed up with director Darren Lee to forge a dark and phantasmal visual interpretation of his new song, Burnside marries sound with vision with his latest release – a parallel delivery that serves to emphasise the importance (and reign) of imagery in his songs.

Joshua Burnside is something of a regional anomaly, with a brooding, powerful sound echoing artists of places afar and time long gone, his enthralling craft defies local comparison in striving towards an aesthetic as much as visual as it is sonic. The If You’re Goin That Way EP was recorded at his home in Lisbane, Co. Down, blending a fragile, yet ultimately commanding, chamber folk sound, gloriously underpinned with unique zeal. His sound is delivered with a hypnotic fragility reminiscent of the likes of Beirut, Neutral Milk Hotel and Bright Eyes.

Following the release of his debut album, the Northern Irish Music Prize winning Ephrata in 2017, Joshua Burnside has had a busy time clocking up four million plays on Spotify, with two sell out London shows, appearances at international festivals including Reeperbahn and The Great Escape. He performed for Folk Alliance and the British Music Embassy at SXSW 2018, where he was chosen by NPR as one of the festival highlights – “Burnside’s sound surges with real force… an intoxicating bundle of frayed nerves and woozy intensity.” He also played a 6 Music Fringe event during the recent BBC Big Weekend.

Whilst he creates songs that are understated yet passionate and heartfelt, he is not afraid to tackle difficult subject matter. On the back of winning the Northern Irish Music prize and his controversial political track calling for peace “Red and White Blues” (which he was stopped from playing during a live session for local a BBC station as it name checks the DUP), he was invited to play for President Bill Clinton at Belfast City Hall at a private event to mark 20 years of the Good Friday Agreement on 10 March 2018.

He has also had extensive radio play and support from the likes of Guy Garvey, Tom Robinson, Tom Ravenscroft, Lauren Laverne, Huw Stephens and Phil Taggart. Joshua performed at the Atlantic Sessions in Portstewart, as well as the music trail for Other Voices in Dingle in December

He released an EP, All Round The Light Said, in June 2018, which featured the devastating single “A Man Of High Renown”, which Clash described as; “From the delightful accordion lines to the thumping percussion, ‘A Man Of High Renown’ has a physical side to its engrossing poetry.”