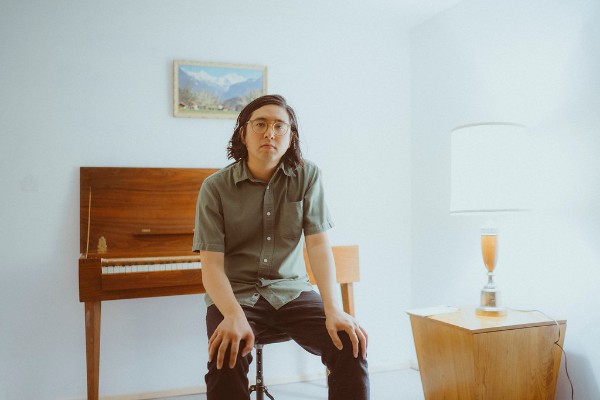 Today he shares “Common Sense“, the second single taken from the album and a song about examining every word of every sentence you’ve ever said. Having thoughts cascade endlessly.

“”Only the time wears me out, I grind my teeth down.” comes from my dentist recommending that I wear a mouth guard at night because I’d been grinding and clenching my teeth, slowly wearing them down”.

“The Clavinet was recorded in the basement of a stranger I met on Craigslist. The basement seemed normal but part of me was still thinking “I should probably get this done before they decide to lock the door”. I managed to record all the keys parts in one take.”

‘J. Fernandez draws on the motoric patterns of bands like Stereolab and the shifty meters of progressive rock in songs that were modest on the surface but gently insistent. Proudly intelligent indie-rock’ – New York Times

‘Fernandez is conjuring sensations I’ve felt before on Broadcast records and in some of the darker corners of the Elephant 6 collective, but his sound is distinctly his own. I’m starting to think this guy is incapable of making a bad song.’ – Stereogum

‘Mini masterpieces that promise a sunny future. Is J Fernandez the next great American songwriter?’ 8/10 – NME

‘One of 2015’s more underrated albums. If you haven’t listened to J Fernandez’ new album yet, you really should’ – Brooklyn Vegan

‘J Fernandez produce a kind of textural, geometric indie rock; think a relaxed Tortoise with vocals. ‘Many Levels of Laughter’ is a brilliant mix of influences: faintly delirious jazz, psych, loops and shades of Jim O’Rourke. It’s intriguing and compelling and very moreish.’ – The Guardian

‘Fernandez has an array of sound and flexible ideas that make him a must-watch. Like, moving to Chicago and stalking him.’ – TinyMixtapes

‘J Fernandez’s versatility makes him one of the most exciting new artists around.’ -Exclaim!