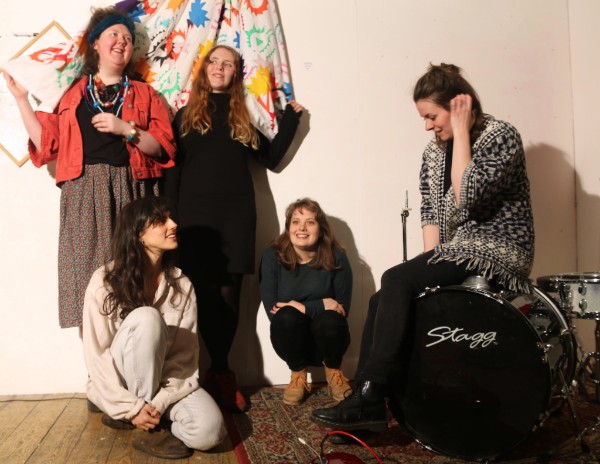 Bursting forth in a riot of colour, Hairband are a new five piece group from Glasgow who, on their debut recordings, have distilled the joy and bittersweet trials of youth into 5 songs that bend to no rules but the ones they make up as they go along. Deeply immersed in their local DIY scene and featuring members of groups Spinning Coin, Breakfast Muff,Lush Purr and Kaputt, Hairband’s take on pop music is their own, so natural yet odd-shaped, carefree but meticulously constructed that it feels like no one has quite made music quite like this before, celebratory and joyful. Recorded in Glasgow’s famed Green Door Studios, and played in the moment, Hairband are life-giving.

Today they share a new video for their latest single “Flying“, taken from their debut EP due 19th October on Monorail Music, a new record label run of out the city’s esteemed Monorail Records shop.

Filmed in the dead of winter at an evening market, the band say about the clip…

“Filming the video was magical, lots of mulled wine and dancing. It’s just a real glimpse into friends having fun and making memories and I think that is a reflection of what we are doing as a band.”

The music here presents as streamlined pop but bubbling beneath the hooks is audacious instrumental work. Indeed, the tension at the heart of Hairband’s music is a group who can play without it sounding like a big deal. Is this a Glasgow thing, because Orange Juicewere a bit like that, Sacred Paws too. Hairband even try on a little Marquee Moon-era Television on Sassy Moon and make it fit like the best charity shop find ever.

They’re a band with five songwriters, each distinct with a uniqueness barely containable except within Hairband. The synergy of the group often means that individual personalities are immersed in the whole, so when Rachel Taylor’s voice is isolated at the end of Flying – a sweet but sure ode to gravity, about trying to stay grounded when the world is spinning – it’s all the more affecting.

The play of light and shade throughout the record is deftly handled: opener Bee has an intricate rhythmic accompaniment, sounding a little like Life Without Buildings’ jittery polyrhythms married to a sweet ensemble vocal performance topped off with melodically nourishing guitar licks. It’s a formula repeated on Bubble Sword, with guitarists Rowan Wright and Simone Wilson’s twin chords criss crossing across the stereo-field before a straight down the line, loaded rock riff skewers the prettiness.

On the flip side, Hairband’s true instrumental prowess is on 10. Sassy Moon rolls out with the confidence of a band completely in tune with each other, Wilson’s vocal dancing across the treetops, Morricone-esque guitar slashes providing vivid colour. With Lock and Smith’s tight-but-loose rhythm loping purposefully and the group backing vocals washing over, suddenly the line “How do you feel? How do you feel… about the moon?” feels like the most important question you’ll ever be asked.

White Teeth sums up every high on this epic self-titled debut. A stomping rhythm shrouded in soft melancholy emboldened by the band’s glorious sense of harmony. It could be a critique of beauty norms, a ghostly memory of an ideal unattainable but ultimately when the band are locked in like this it’s a source of pure joy, it goes beyond subject matter into wordless communication.

Hairband is an ode to doing things differently, true, to standing together with your friends, to having respect for what’s gone before but also to carving your own niche. It’s simple, it’s not so simple, as Chic say, “celebrate good times”, Hairband seem to say, celebrate the times.

“Like a lot of Scottish DIY, there is an innocent quality to their melodies and vocals (which are lovely) while at the same time a complex nature to their music, using odd time signatures and rhythms.” – Brooklyn Vegan 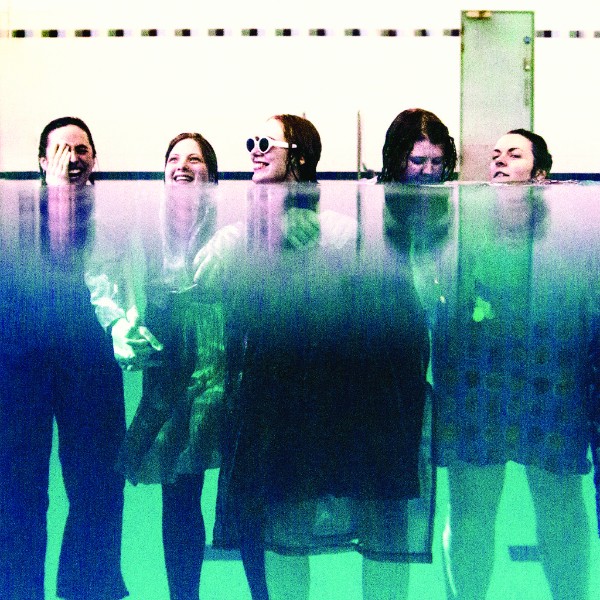