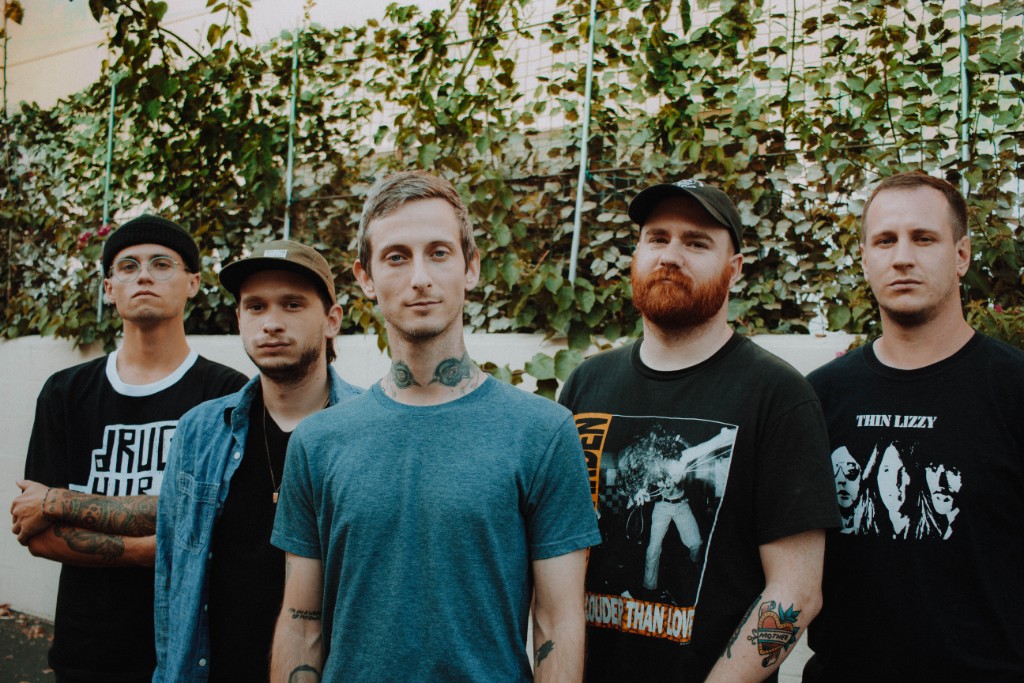 New Album Cheer Due Out 11/02
on Pure Noise Records

Praise for Drug Church and Cheer:
“It’s just raw, incendiary, kicka*ss, super-catchy music…” – Stereogum
“Cheer feels like the culmination of all the work the band has put in over the past half-decade…” – Noisey
“…twinkling and terrifying, grizzly and gleaming, Drug Church’s sonic concoction thrives on its duality.” – NME
“…an alternate-universe sort of grunge-pop that’s both heavy and insanely catchy.” – Revolver

Punk rock agitators Drug Church have teamed with Stereogum to share their new song “Unlicensed Hall Monitor” and its accompanying video. The kinetic track comes from their upcoming third full-length, Cheer, due out November 2nd on Pure Noise Records. “Unlicensed Hall Monitor” explodes with Drug Church’s signature blend of aggression and melody, as vocalist Patrick Kindlon (also of Self Defense Family) laments the bad faith arguing and sanctimonious behavior that often thrives on social media. Kindlon’s speciality is frustration mixed with self-awareness and “Unlicensed Hall Monitor” is a perfect example of the uncomfortable yet distinctly human vignettes found on Cheer.

Stereogum called Cheer, “absolutely 100% perfect from beginning to end” and praised Kindlon’s lyrics saying, “Cheer is absolutely essential to this very moment in time. It doesn’t indulge in the apathy, irony, or empty sentimentality endemic to Gen-X; it is, instead, a furious thing that incinerates everything in its scope.”

Drug Church are a glorious contradiction. They are an undeniably aggressive band that writes hooks you can’t stop humming: too poppy for the heavy crowd, too heavy for the poppy crowd. Their frontman is a singer who rarely sings and delivers lyrics that revel in the darkest corners of the human condition, but are just as likely to make you laugh as they are to make you flinch. They loudly shout the uncomfortable truths we prefer to ignore but somehow make us want to shout along with them; they make serious music but don’t take themselves too seriously; they are completely adverse to planning but have accidentally built a loyal cult following. On Cheer, the band has doubled down on their Drug Church-iest impulses and emerged with an album that’s sure to please longtime fans and turn new heads. If there’s anything intentional about Drug Church, it’s knowing the value of being unintentional.

Drug Church will be supporting Cheer on tour all throughout the fall with a headlining run with support from Gouge Away, Heart Attack Man, and Seattle’s New Gods. See full itinerary below. 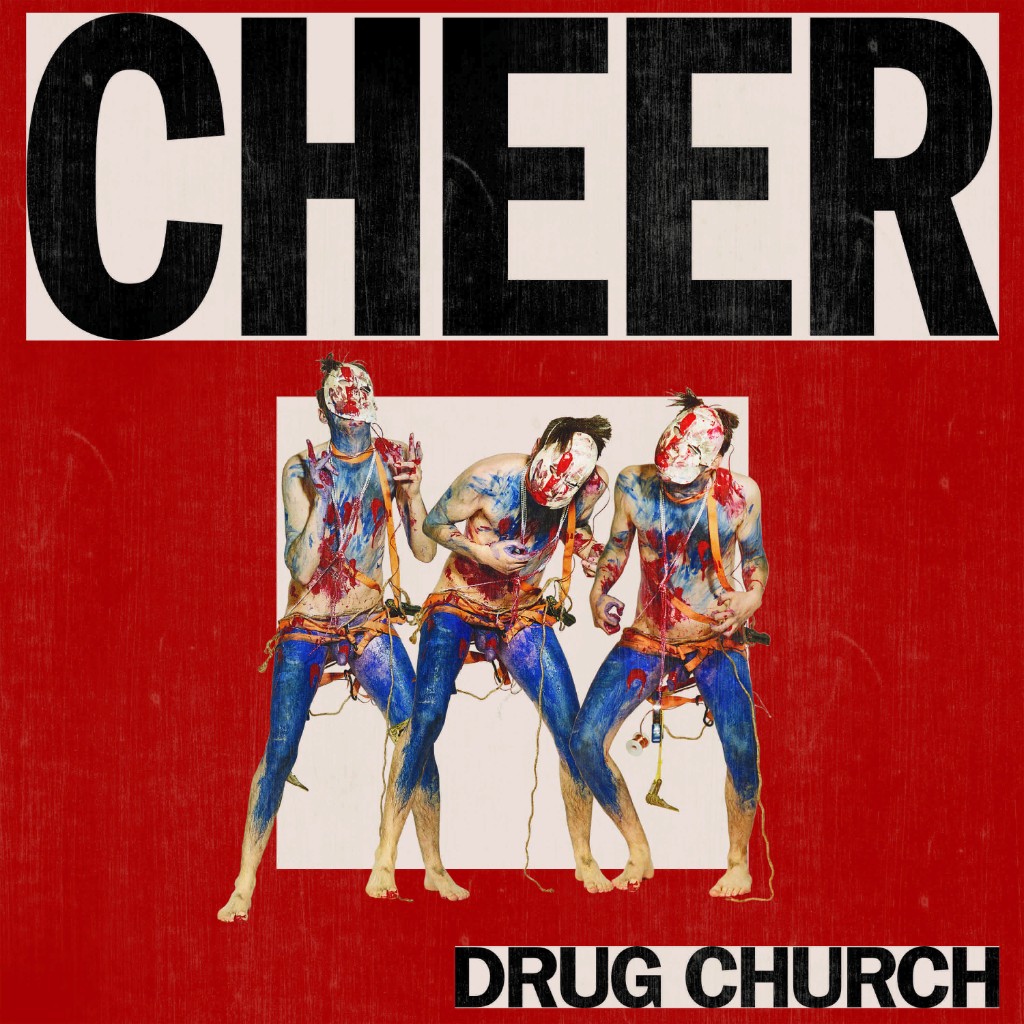 Biography:
Drug Church are a glorious contradiction. They’re an unabashedly aggressive band that writes hooks you can’t stop humming–too poppy for the heavy crowd, too heavy for the poppy crowd. Their frontman is a singer who rarely sings, delivering lyrics that revel in the darkest corners of the human condition but are just as likely to make you laugh as to make you flinch. The band loudly shouts uncomfortable truths we’d prefer to avoid but makes us want to shout along with them; they make serious music but don’t take themselves too seriously; they’re completely adverse to planning but have found accidental success. Now on their third full-length, Cheer, the band has doubled down on their Drug Church-iest impulses and somehow emerged with their most accessible album to date.

Over six years, several EPs, and two full-lengths, Drug Church–Patrick Kindlon (vocals), Nick Cogan (guitar), Cory Galusha (guitar), Pat Wynne (bass), and Chris Villeneuve (drums)–have earned a cult following by making outsider music that’s as thoughtful as it is hard hitting. Their sound is a crushing mix of hardcore energy, ‘90s alternative melodicism, and Kindlon’s signature sing-shout; if that doesn’t exactly fit into a convenient box, it’s because the most intentional thing about Drug Church is knowing the value of being unintentional. Kindlon says, “If I have any success I’d like it to be just because people like the thing, not because I sat in a dark room learning brand alchemy.” Adding a sardonic twist to the just-be-yourself mantra, he contends, “If you don’t lie then you don’t have to worry about maintaining the lie.” Drug Church are who they are, so why not lean into it?

On Cheer, this means recognizing the band’s strengths and amplifying them into something new. Whereas some of the band’s previous work had more clearly delineated heavy songs and catchy songs, Cheer combines it all to great effect. Galusha and Cogan’s riffs deftly move from pummeling to playful while Wynne and Villeneuve provide more than enough heft to compel the headbangers. Songs like “Unlicensed Guidance Counselor,” “Conflict Minded,” and “Tillary” are easily the most overtly melodic of the band’s career, and even Kindlon’s vocals take a more tuneful bent that often contrasts with his dark, cutting lyrics.

Kindlon’s words are a key part of Drug Church’s DNA. In line with the band’s less than methodical approach, he always waits to write until they’re in the studio, joking, “My brain seems to work very fast when I’m wasting other people’s money.” Kindlon’s lyrics are usually personal experiences mixed with off-kilter observations, striking a delicate balance between honesty, absurdity, sadness, and humor, and often engaging with life’s ugliness. “Avoidarama” is an anthem for antisocial tendencies that also tries to see consequences and multiple perspectives, while “Strong References” takes a deep dive into the seedy business of self-delusion for the sake of potential success. These vignettes of humanity’s less than appealing inclinations are painted with detail but not judgement–that is, unless his subject is doing the judging.

Much of Cheer dissects the thoroughly modern phenomenon of ever-present social media and the impact it has on our interactions. “The internet strives to create a one note person that just doesn’t exist,” says Kindlon, who seeks to write songs that are well-rounded, even if that means focusing on awkward topics. On several songs he takes aim at the bad faith arguing that can thrive on the internet, explaining, “I can accept just about any human failing, except sanctimony. More often than not, neither side of an argument cares about other people’s lives, they just want to win. Sanctimony makes the rest of us cynical because when we see actual righteous things, we can’t help but doubt people’s intentions.” But of course this wouldn’t be Drug Church without a health dose of self-deprecation, with Kindlon wryly adding, “My sanctimony is hating sanctimonious people.”

Cheer may be Drug Church’s most welcoming record but there remains a fierce defiance at its heart. “I’m not gonna be told how to live by literally anybody on earth,” says Kindlon. The same attitude applies to the band, which chooses to look at, laugh at, and learn from life’s endless weirdness and contradictions, whether others want to or not.