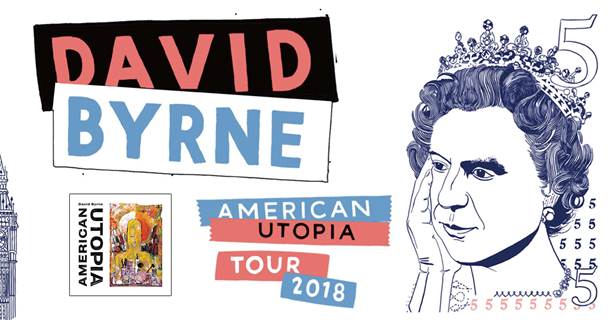 David Byrne, who closed the US leg of his 2018 American Utopia world tour at the Austin City Limits festival last weekend, brings the show back to the UK and to Ireland for eight arena shows starting at the First Direct Arena in Leeds this Sunday and including concerts at the O2 Arena in London,Manchester Arena, Hydro in Glasgow, 3Arena in Dublin, and more.  Benjamin Clementine will be Byrne’s special guest for the UK and Irish dates.  The tour will then make stops in Amsterdam and Paris before heading to Hong Kong, New Zealand (where Kimbra will be special guest), and Australia. “If you only go to one gig this autumn [or spring, depending],” says the Independent, “make it this: David Byrne’s imaginative, breathtaking show is a work of art.”

Byrne will perform songs from his new album, American Utopia, as well as classics from his solo career and his days with Talking Heads. A twelve-piece band will join Byrne on stage for an Annie-B Parson choreographed concert that he has called “the most ambitious show I’ve done since the shows that were filmed for Stop Making Sense.” Annie-B Parson also choreographed the St. Vincent and David Byrne collaboration tour around Love This Giant. It will be Byrne’s first tour of New Zealand since 2009.

The tour was in the UK for a week of sold-out shows this past spring, all met with rave reviews, starting with the NME’s declaration: “The American Utopia tour may just be the best live show of all time.” “An unforgettably unique, imaginative, and kaleidoscopically entrancing spectacle of music, dance, and theatre,” exclaims the Telegraph. “This was something special.” “One of the most mind-blowingly meticulous and awe-inspiring productions you could ever hope to see,” says the Independent. “Perfection.” “Daringly ambitious and full of joy,” says the Evening Standard. “Mass exposure to his glorious, life-affirming American Utopia show alone would make the world a better place,” says the Scotsman. “An extraordinary, ecstatic show.” The tour was also shortlisted for a Q Award for Best Live Act.

For all the latest ticket details on the complete tour, visit nonesuch.com/on-tour.