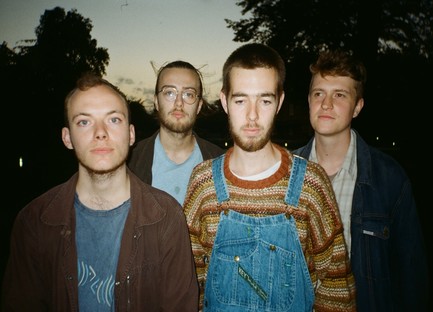 BREATHE PANEL
RELEASE NEW VIDEO ‘ON MY WAY’ AHEAD OF OUR GIRL SUPPORT
ANNOUNCE FEBRUARY UK HEADLINE TOUR
Breathe Panel combine elements of shoegaze, dream-pop and psychedelia in their debut self-titled album out now on celebrated label, FatCat Records. They’ve now shared their brand new DIY video ahead of their Our Girl support slots as well as the announcement of their first UK headline tour.
Of the video, the band tell us “The footage that accompanies ‘On My Way’ is a document of the two weeks we spent recording the album in Leeds with MJ. The song was one of our earliest ever written as a band and it mainly covers the feeling of moving somewhere new, mapping out an area, and starting projects (such as the band itself). It’s an ode to Breathe Panel’s birth and journey onwards.”
The album has received critical acclaim as BBC 6 Music’s Album Of The Day and with support from the likes of John Kennedy (Radio X), Matt Wilkinson (Beats 1), KEXP, Felix White (Soho Radio), NME, So Young Magazine, DIY, Dork and Clash.
Meeting at University, Josh Tyler, Nick Green and Benjamin Reeves sprung out of a vibrant scene of musicians playing and gigging together. Between writing in a shared house basement and taking long walks on the South Downs, Breathe Panel have crafted their own sound based around the intuitive songwriting partnership of Josh and Nick.
Recalling thoughtful days spent outdoors, Nick’s vocals wash across bright, shimmering guitars and intricate drum patterns to create something beautifully expansive yet highly introspective. They combine writing about topics including anxiety, colours, people, memories and the cure of nature with capturing a sound that makes them feel good.
Signed to FatCat Records (C Duncan, TRAAMS, Sigur Rós) and now based in London and Brighton, Breathe Panel released their debut album in July 2018. Recorded with Hookworms’ frontman and production wizard MJ at his Suburban Home Studio in Leeds, the band have drawn upon musical influences including Chris Cohen, Real Estate and Deerhunter.
Having already shared stages with the likes of Methyl Ethel, Quilt, Pip Blom, Holy Wave and The Big Moon, their live show is not one to miss.
Breathe Panel are: Nick Green (vocals and guitar), Josh Tyler (guitar), Benjamin Reeves (drums) and Alex Turner (bass guitar).
Live Dates with Our Girl
24.10.18 Southampton – Heartbreakers
25.10.18 London – The Garage
26.10.18 Brighton – The Haunt
UK Headline
01.02.19 – The Apple & Parrot, Torquay
15.02.19 – The Dark Horse, Birmingham
16.02.19 – The Purple Turtle, Reading
18.02.19 – Jimmy’s NQ, Manchester
19.02.19 – Hug & Pint, Glasgow
20.02.19 – Hyde Park Book Club, Leeds
21.02.19 – Shacklewell Arms, London
22 .02.19 – Rough Trade, Bristol
Facebook