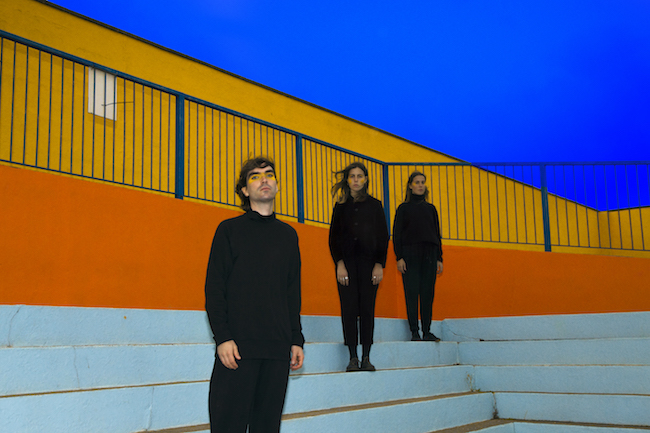 “Refreshing, thoughtful, and different” The Line of Best Fit

The new single perfectly showcases the band’s composite sound, on which solid songwriting nods in different directions to experimental pop, electronics and a touch of psychedelia. Of the song, the band said, “We wanted to make a track that was almost disconcertingly upbeat while essentially being about a last-ditch cry for help. We took quite a lot of inspiration from old kids tv themes, particularly towards the end. The title refers to a kind of nightmare image; we wanted to make a track that was dreamlike, but with the potential to descend into a nightmare”.

‘1,000 Opera Singers Working in Starbucks’ is accompanied by a wonderful animation video, created by Kate Woodland: “My style of animation is playful, I have an interest in exploring nonsensical themes through visual metaphors. The process begins by initially scanning pages from art and culture magazines, using Photoshop I cut out various parts of the images and combine them into a new frame. I manipulate and work into the cut-outs and build the scenes from scratch, frame by frame. I met Wovoka last year after a friend introduced me to the band. We discussed working on something together and after listening to the new track it seemed like a great opportunity to make this happen”.

The single will be also be included in the official soundtrack of FIFA 19, the largest sports videogame franchise in the world, out on 29th September.
The band have announced a couple of live dates, including their biggest London headline show to date at the Institute of Contemporary Arts in November. More to be announced soon.
TUESDAY 6TH NOVEMBER – LOUISIANA – BRISTOL, UK – INFO
THURSDAY 8TH NOVEMBER – ICA – LONDON, UK – TICKETS
Wovoka Gentle are an experimental three-piece from London, comprised of William Stokes and twins Imogen and Ellie Mason. Taking its root in folk and Americana songwriting, the Wovoka sound draws upon the psychedelic soundscapes of the late 60s as well as contemporary experimental, pop and collage music; marrying classic instrumentation with sampling, analogue synthesis and sound manipulation.
www.wovokagentle.com