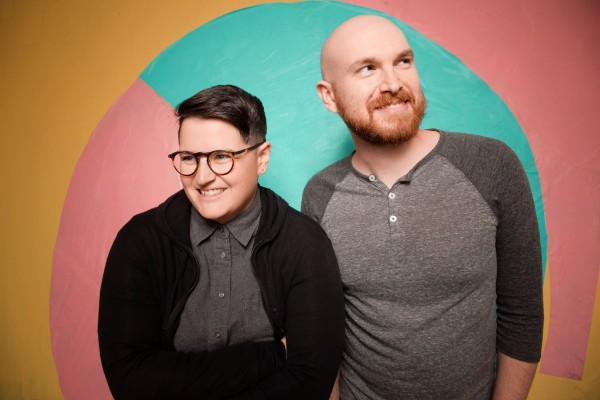 Brooklyn’s Soft Center have just announced their new album No Pattern, set to be released on October 19th. The band is now premiering the first single from the record “East Jesus” via Stereogum. According to Stereogum, Soft Center, “blend acoustic guitar with amped-up keyboards and a sugary, hard-hitting energy, and their songwriting trends towards the darker sides of the psyche.” They call “East Jesus,” “a runaway song about the inevitable apocalypse.” Pre-orders for No Pattern are available now. The album was engineered by Beau Sorenson (Death Cab For Cutie, Sparklehorse, Tune-Yards) at Tiny Telephone, and mastered by Scott Hull (Nirvana, Bruce Springsteen, The Breeders).

No Pattern Tracklisting:
1. Alt Endings
2. Loose Ends
3. No Pattern
4. Fireworks
5. Undressed
6. 2008
7. Open For Business
8. Remember To Vote
9. East Jesus
10. Temple
Biography:
No Pattern is the debut album from Soft Center, long-time friends and collaborators Gina Pensiero (songwriting, vocals, guitar) and Sean Lango (guitar and everything else). The pair met in grade school in the Manhattan-commuting suburbs of New Jersey and began playing music together in the early 2000s. This is their first outing as a pair, but some hallmarks of their past projects (most notably the Brooklyn-based band Palmyra) remain: thoughtful lyrics, considered sounds, and an indie rock approach to concise-but-heartfelt songs. In their own words about this music:

“Some of our earliest memories of playing music together are from the pre-smartphone era but all of our past recordings together have been partially or totally digital in process. When we had the opportunity to escape NYC to John Vanderslice’s Tiny Telephone Studio in California and immerse ourselves in the analog world, we jumped right into it. This recording was about opening up to the vulnerability that’s inherent in leaving computers and screens out of the work. Recording this way not only let us focus more on the sounds themselves (rather than their digital, visual representations), but also helped us embrace imperfection. Neither of us are technophobes, but sometimes some beautiful things happen when you don’t get a thousand re-dos and limitless editing capabilities.”

Soft Center has been dedicated to working with people they admire from the very start to create a crafted, quality, finished work. The album was recorded and mixed by Beau Sorenson (Tune-Yards, Thao and the Get Down Stay Down, Death Cab For Cutie, Sparklehorse) and mastered by Scott Hull (The Breeders, Nirvana, Bruce Springsteen). At times, the music sounds like a mix between Neutral Milk Hotel and the New Pornographers; at others, more like Leonard Cohen. Songs that range from celebratory to contemplative tackle themes of nostalgia for a different time and a search for meaning in a world that feels increasingly fast, strange and disconnected; things that today’s listeners will likely find familiar.