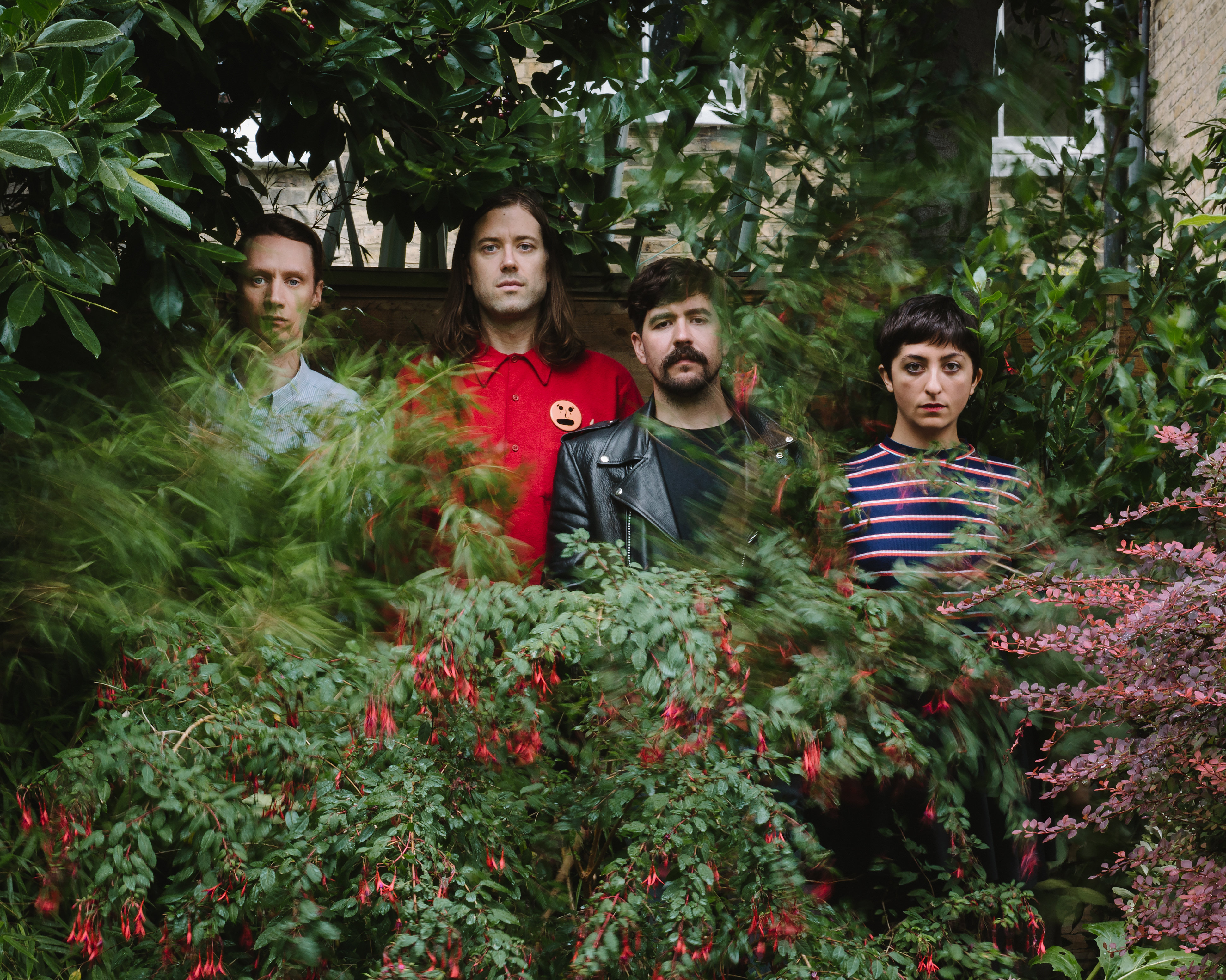 New album, Deaths due 7th September on Upset The Rhythm

Drummer/vocalist Richard Phoenix says of “Unreal City“, “This song is lyrically a collection of individual one panel stories – like the Far Side but with no jokes – about living in London, and musically trying to channel BS2000 and the end of Dionne Warwick’s “Always something there to remind me” with a nice drum break, but with no finesse.”

The final part in a trilogy of LPs that started with Dreamlands in 2012 (wide-eyed, naive beginnings introducing listeners to the world the records inhabit), followed by Distractionsthree years ago (what happens while you’re heading towards a destination, the unknowns, the unexpected outcomes), the songs that comprise Deaths are collectively about the act of finishing, an ode to ‘the ending’.

The album was created and facilitated through a series of deadlines: the recording studio was booked before any songs had been written. Having a deadline in advance allowed for productive freedom through limitation and finite time: five months to write the album, that was it. This meant meeting every week to write no matter how many members could make it, filling in on each other’s instruments (reminiscent of how side-project Monotony came about: writer’s block in a Sauna Youth practice – removing yourself from your role in a band removes the old expectations) and using automatic writing processes.

The 12 tracks touch on political rhetoric, artistic legacy, action and passivity, work and leisure, and, of course, distraction, referencing many musical genres in the process while never leaving punk’s orbit.

Creative living becomes more gruelling and endless than the 9 to 5 on ‘Leisure Time’, how freelance living and having multiple jobs both result in no free time. Being in a band is leisure time, but can be a lot of work. Our lives should afford us with time, but we fill it with activity.

‘No Personal Space’ looks at the cyclical nature of music, referencing ‘New Rose’ – the first single by a British punk band – via a drumbeat and lyrics, exploring the enclosure of the genre, while ‘Percentages’ was written at a point of political and social upheaval and problematizes the use of numbers as a form of proof. Whole groups of people have been reduced to statistics for political reasons, and people use and manipulate statistics to prove any point they want.

‘In Flux’ is about whatever is opposite to creativity – that even trying to see an idea through to its conclusion can be what kills it, followed by the pure pop number ‘Laura’, and ‘Problems’ – a former Monotony song – which reduces the punk song to its essential elements, aiming to sound like being inside a brake factory and repeating “Problems” until it has rendered the word completely meaningless.

The album ends with a wild and playful rejection of patriarchy and a frustration with those who uphold it either willingly or through inaction in the form of the unhinged ‘Theatre 83‘. It’s like English music hall meets ‘We’re A Happy Family’ by The Ramones.

Like the previous two albums, Deaths includes writing put to music. ‘Swerve’ and ‘The Patio’ are extracts from a short story written by band member Ecke about the murder of an artist whose estate is overseen by her ambitious sister, and is read by writer and frontperson of Marcel Wave, Maike Hale-Jones.

Samples are as important as they ever were – this time including the aforementioned electrical interference, recordings of practice and YouTube videos of lawnmowers and cafe noise that people (including members of the band) listen to while working to distract their mind in order to focus.

An album once finished is frozen in time, solid and no longer resistent or adaptive to outside forces. Does the difficulty to find an end come from the genre, from punk’s revisionist impulse, redoing the same thing over and over? Do we avoid an ending because playing in a band is a distraction from everyday life?

The album was recorded by John Hannon of No Recording Studios in June 2017 over three days, mixed by Jonah Falco and mastered by Kris Lapke.

The cover was shot in a garden in Brixton by Owen Richards, who also photographed the covers for the previous albums. Additional artwork provided by R.M. Phoenix. The first 500 copies of the LP version each come with a unique 3 colour screen-print produced by Mince at The Positive Press.

Sauna Youth is Boon, Mince, Ecke and Pines. They played together in the band Monotony, and between them have played or do play in other bands and music projects including Primitive Parts, Feature, Child’s Pose, Lilac, Cold Pumas, Oblate, Teufelskreis, Mind Jail, Gold Foil, Tense Men as well as being involved with the organisations Good Night Out, The Positive Press, Constant Flux & Heart n Soul.
Tracklisting:
1. Percentages
2. Unreal City
3. Distracted
4. In Flux
5. Problems
6. No Personal Space
7. The Patio
8. Leisure Time
9. Veiled Critique
10. Laura
11. Swerve
12. Theatre 83 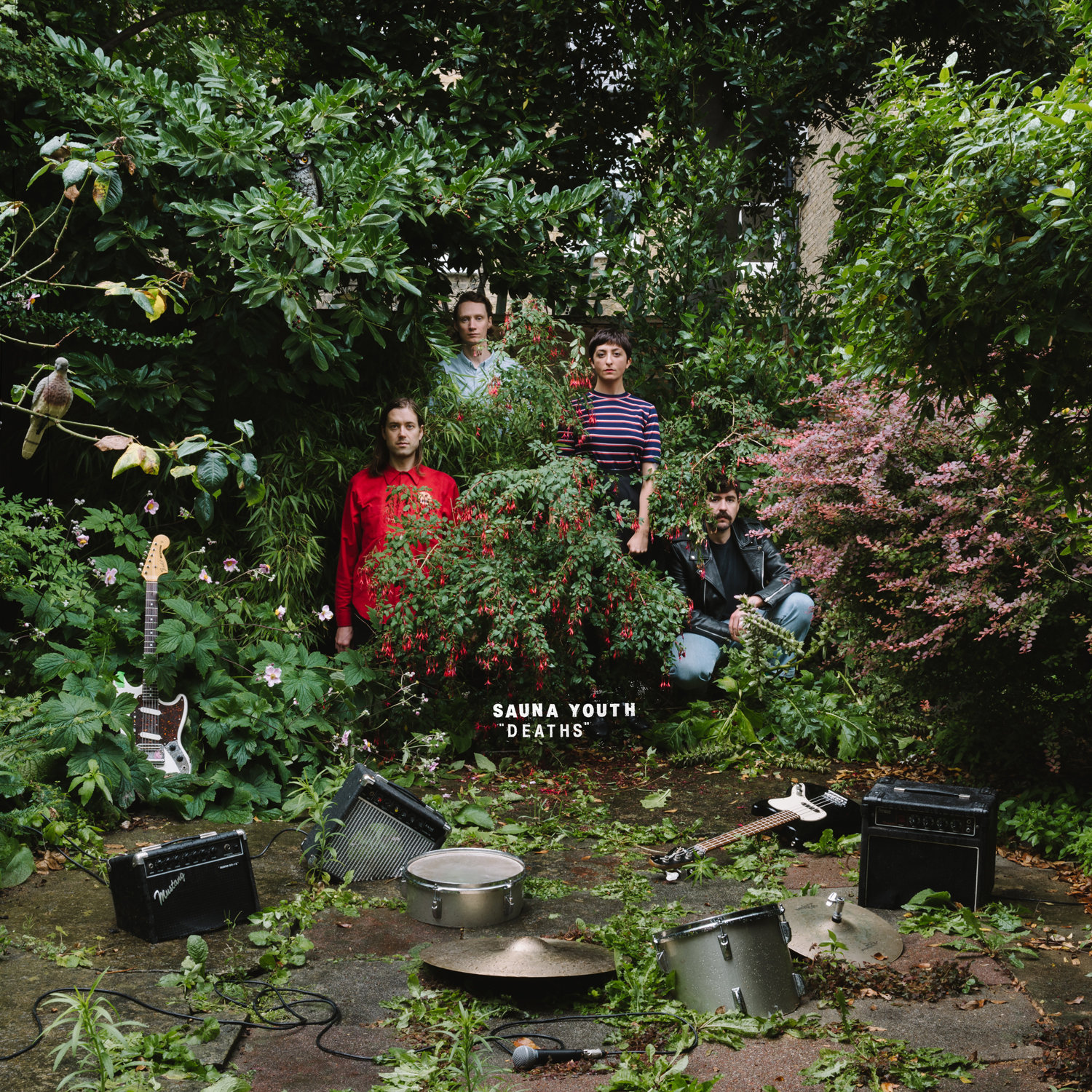