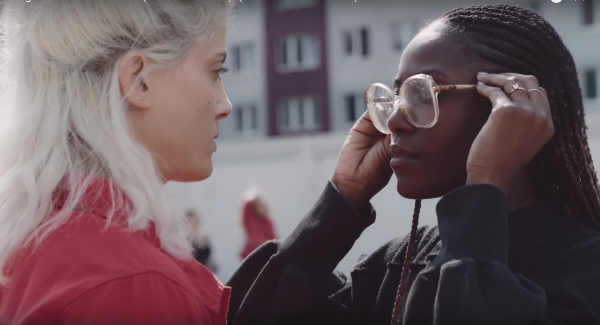 NOGA EREZ has shared a compelling new video to accompany her latest single, “CASH OUT.” Co-starring Philadelphia rapper SAMMUS, who guest vocals on the song, the video was conceived by Erez and her collaborative partner Ori Rousso and directed by Hen Makhluf. It brings to life a biting track that calls out the contradicting pressures piled on women through consumerist society.

“In the “CASH OUT” video we tell a story about a society of women left in a world without men” Erez explains.“Specifically, focusing on a group who arrange street fighting meet-ups – fights for the mere joy and rush of adrenaline. In that female-only world we imagine the behaviour of the women and how much of the societal female characteristics remain and what’s lost.”

On “Cash Out” Noga Erez snarls in her distinctive drawl: “Keep your head low / Keep your weight low / Slow walk up a hill / Tip toe tip toe / Dream it till it’s yours / Don’t dream too high though / Ceiling hits your head / Your billing’s always low.” Later SAMMUS takes over, snapping “I can handle many scandals like I am the Pope, not the sistine’s / What I can’t do is dismantle every single trope in our histories.”

Recent singles “Bad Habits” and “Cash Out” see a stylistic shift from the Tel-Aviv based producer/performer and her collaborative partner Ori Rousso, moving away from the more song-based tracks on 2017’s highly acclaimed debut album ‘Off The Radar’ (City Slang). These standalone singles hint at an exciting future for an enthralling and unpredictable artist whose sound is rapidly developing, yet always distinctive, uncompromising and truth-seeking.

Praise for ‘Off The Radar’:
“Fusing accomplished songwriting and cutting-edge bass music with wondrous aplomb.” – 10/10, DJ Mag
“Israel’s most defiant star.” – The Observer
“Too fierce and original to be pigeonholed.” – Sunday Times Culture
“The work of an artist light years down the line.” – DIY
“She is fearless and fantastic.” – Wonderland
“Erez’s music expertly channels the unease that’s crept over the world.” – i-D
“The combination of music and visuals is close to unbeatable.” – Loud & Quiet
“Few artists are making electronic music quite as striking and important as Noga Erez is right now.” – NME
“An incredibly accomplished record, which carves out a distinct sound that captures and captivates the listener.” –  The Skinny
“All the vim and energy of Tel Aviv’s music scene is squeezed into this exciting young Israeli’s debut LP. Go loud.” – Monocle