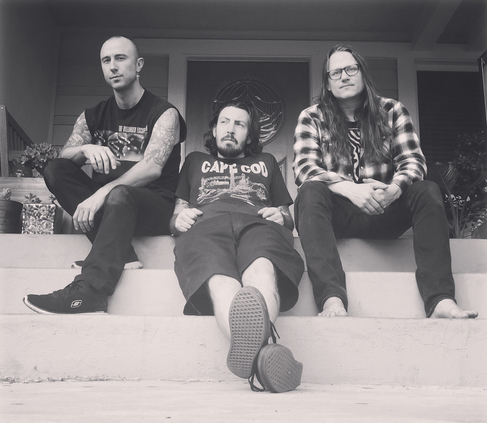 LA TRIO AND SOUTHERN LORD SIGNING THE PRIMALS SHARE NEW SINGLE “PITY CITY”
FROM THEIR DEBUT ALL LOVE IS TRUE LOVE; PLUS STUDIO FOOTAGE SHARED
“Pity City” is the raging new track from LA-based rock trio The Primals – vocalist/guitarist John Henry (vocalist for Darkest Hour), bassist Chad Fjerstad (formerly of Dead To Fall), and drummer Andrew Black (formerly of The Explosion) – taken from their incoming debut album All Love Is True Love.
About “Pity City” the band’s John Henry explains, “This song originally came from a different project I was working on which was more electronic, using an old Univox drum machine and a bunch of layered synths and guitars. It stood out to me as more of a structured song than the rest from that session, so I decided to see if it would work with The Primals. Once Andrew added his version of the drumbeat and I heard it with Chad playing the driving bassline I knew it would work. This one is definitely more on the poppy/pretty end of the spectrum of the album, and the only track that features a synth part. Lyrically this track is a good representation of the album title, All Love Is True Love, as it’s sort of a love song to everyone I’ve ever loved, even the ones who are out of my life. I think the last lines sum up the song fairly well: “Me and the ones I adore, I don’t believe there’s an end anymore, and we are nothing’.”
The band’s fuzzy execution is equal slabs ripping guitar heaviness and infectious pop sensibility. Concocted by a seasoned group of thrashers with a historical backbone in D.C. punk community. The disintegrated spirit of grunge rises from the ashes, revitalised in a new light.
All Love Is True Love, The Primals’ debut album, features ten infectious tracks produced by John Reis (Rocket From The Crypt, Drive Like Jehu, Hot Snakes) and completed with cover art by Laura K. Giron. Fans of Wand, Ty Segall, Nirvana, and The Pixies are especially recommended to tune in.
Southern Lord will release The Primals’ All Love Is True Love on CD, LP, and digital platforms on September 7th. Find digital preorders via bandcamp; watch for physical preorder options, additional audio samples, and more to be shared in the days ahead.
All Love Is True Love Track Listing:
1. Hello Cruel World
2. Dead Predators
3. Another World To Call Your Own
4. Pity City
5. Fortune & Sons
6. The Wayward Impaler
7. It’s Personal
8. Together Whatever
9. Save Me, Baby
10. I’m Coming Home
THE PRIMALS LIVE:
07/09/2018 Hi-Hat – Los Angeles, CA *record release show w/ Prissy Whip, Death Crux, Fraude, DJ Tuna
14/09/2018 The Pinch – Washington, DC *record release show w/ Despite Despair, Rat Infested
15/09/2018 El Cortez Safari Room – Brooklyn, NY *record release show
17/11/2018 The Echo – Los Angeles, CA @ The Power Of The Riff kickoff party w/ The Sonics
https://www.facebook.com/ThePrimalsLA
https://theprimalssl.bandcamp.com/releases