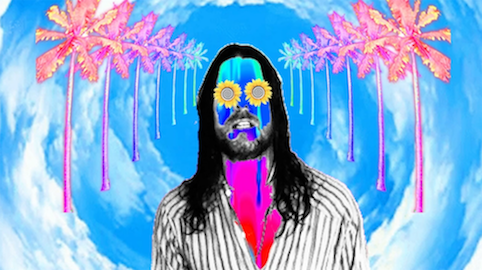 Jonathan Wilson has shared a supremely psychedelic video to the track “Trafalgar Square” from his critically acclaimed recent album Rare Birds. Of the video Wilson says: “I’m very pleased to share the video for ‘Trafalgar Square’… This visual feast was created by the mega-talented Kevin Andrews aka Andrewknives, who is an LA–based digital artist that I really admire. We had been using some of his stunning and completely trippy visuals in my live show, and I really wanted to work with him for a video. He agreed, and I figured “Trafalgar Square” would just about be the perfect marriage of the whimsical and surreal music landscape with his tripped to the max visual – the monolithic riff and that Red droptop in the desert. Hope you enjoy it…”
Following his appearance at the End of The Road festival in Dorset this weekend, Jonathan Wilson will be playing the below three UK headline shows next week…
Tuesday 4th September – GATESHEAD – Sage tickets
Wednesday 5th September – DUNFERMLINE – P.J. Molloys tickets
Thursday 6th September – MANCHESTER – Gorilla tickets
Friday 7th September – LONDON – Islington Assembly Hall tickets
“Multi–layered and beautifully produced, the title track has a touch of Love’s ‘Alone Again Or’ whereas ‘Trafalgar Square’ could have sat comfortably amongst The Beatles late 60s output.”
Louder Than War – 7/10
“Vast and expansive, if you want to go on a musical journey then Rare Birds is the album for you.” DORK – 4 Stars ****