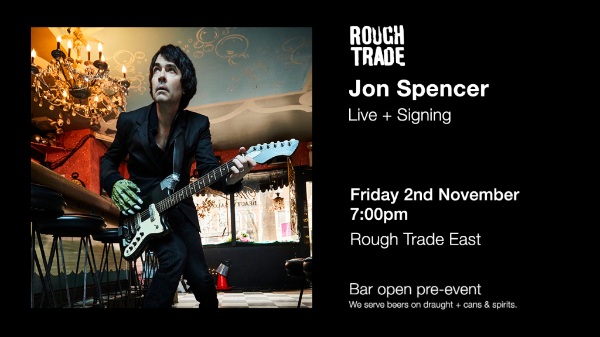 Jon Spencer is back! Often imitated, never duplicated, the original NYC underground-rock legend returns from the wilderness and is back in the UK with The Melvins this October and has now also announced a run of headline appearances to follow in November.

To celebrate the release of ‘Spencer Sings The Hits!’, his debut solo album, Jon Spencer will also be playing a special live set at London’s Rough Trade East on November 2nd and will be signing copies of the album, out that day on In The Red Records.

Doors open at 6pm and Jon Spencer will be onstage at 7pm, with the signing to happen after the live set.
Head here for entry with album purchase:
https://www.roughtrade.com/gb/events/rough-trade-east-jon-spencer

“I can’t wait to get over and play for everyone,” exclaims Spencer. “I will be joined by the HITmakers – Bob Bert (Sonic Youth, Pussy Galore, Chrome Cranks, etc), Sam Coomes (Quasi, Heatmeiser, Elliot Smith), and M. Sord (No Monster Club, M. Sord) – we will be kicking out all of the new long-player ‘SPENCER SINGS THE HITS!’ as well as some choice cuts from Pussy Galore, The Blues Explosion, Heavy Trash, and maybe even a super-secret cover-song or two. We just did a stint in the States with the Melvins so I know from experience that these will be some dynamite nights of rock, roll, riot, and rumble.”

‘Spencer Sings The Hits!’ is Garage Punk for Now People! A wizard’s brew of rhythm & blues and subversive dance grooves, weaponized with sci-fi skronk and industrial attitude, calibrated for the Revolution, a ball-peen hammer of sound guaranteed to destroy any post-modern hangover!

Pulsing with energy, clanging with excitement, and dripping with radioactive soul and raw emotion, Jon Spencer opens up his heart like never before, exploring man’s modern condition with caustic guitars and outerworld crooning, asking and answering the musical question, “Is it possible to torch the cut-throat world of fake news and pre-fab, plastic-coated teen ennui with the cold hard facts of rock’n’roll?”

THE ANSWER IS YES! SPENCER SINGS THE HITS!

JON SPENCER, THE BLUES EXPLOSION MAN who put the BELLBOTTOMS on BABY DRIVER! The Top Cat who spread the Secret Sauce in BOSS HOG! The Rockabilly Right-Hook from Heavyweight Outlaws HEAVY TRASH! The Swank-Fucking Master of PUSSY GALORE!

‘Spencer Sings The Hits!’ is released November 2nd on In The Red Records and is available to pre-order from:
https://www.roughtrade.com/gb/music/jon-spencer-spencer-sings-the-hits