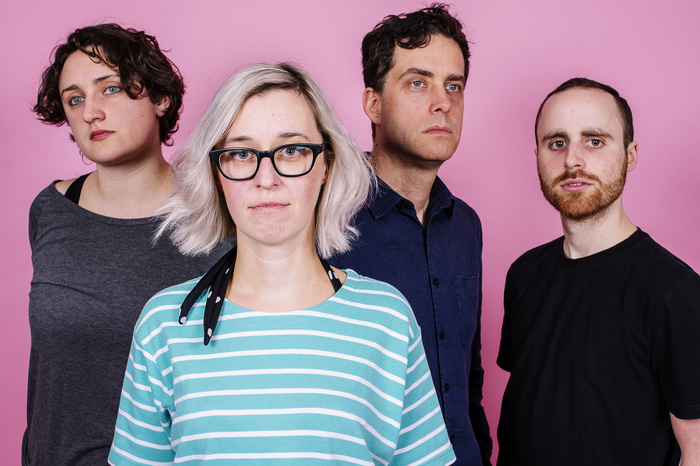 Chorusgirl are delighted to announce their brand new release Shimmer and Spin, the album that overcame the odds, due out on 16 November via Reckless Yes. They shared the first single, the immensely catchy and spikey “No Goodbye” with Clash, who wrote that it is; “a catchy earworm that retains it lyrical secrets until repeated listens.”

Chorusgirl‘s second full-length chronicles a tense year, created during a period of crippling anxiety and a relentless string of bad luck and bad news. On first listen these tensions are not immediately apparent but beyond the bright sparkling melodies there are beautifully crafted yet deceptively sharp icebergs lying in wait. The band will be heading out on the road in November with a string of dates across the UK, starting on 9 November at Hackney’s The Victoria and ending on 23 November at The Tin in Coventry.

Fronted by London-based, German-born songwriter Silvi Wersing, the band recently brought in Faith Taylor of Suggested Friends on lead guitar to round-out the sound, and she even wrote a couple of songs on the record. Completing the line-up is by Udo Westhoff on bass and Michael Boyle on drums.

With their sound rooted in shimmering indiepop with an undercurrent of darkness, Chorusgirl blend the sparkle of 80s bands like The Cure and the Cocteau Twins, with the close harmonies and surf-inspired indie of Dum Dum Girls and La Luz. The lyrics run from the abstract to the personal, are delicate and angry, but layered underneath a measured dose of noise and happy fizz.

Legendary indiepop label Fortuna POP! released their eponymously titled debut album in 2015 to great critical success. The first single “Oh, To Be A Defector” was playlisted by BBC 6Music, and the album ended up on many end-of-year lists, made it into the Rough Trade Top 10 of the month, and a video was shortlisted for the London Short Film Festival.

The moment they had started writing the second album, an extraordinary string of bad luck happened that lasted more than a year. As Silvi explains, “There was barely a month without bad news on a personal and wider level, and at the end of that year, my anxiety started to spike badly. The album became a very important anchor. Every note and lyric were raked over and looked at twice; we were hacking and honing away at the songs for months, trying to craft some sort of sculpture of our state of mind.”

While tension runs through the album, there are plenty of bright pop hooks to enjoy. The music has a way of touching the soul and reaching sublime peaks.