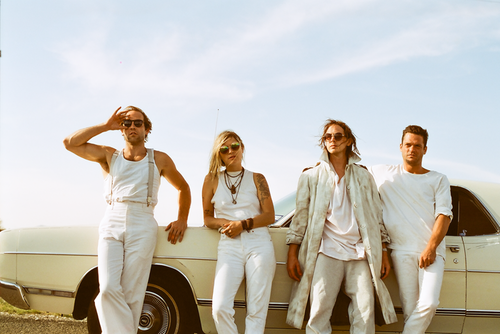 Having toured with Queens Of The Stone Age in the UK and Europe last year, Tulsa, Oklahoma’s BRONCHO return with Bad Behavior, due out on 12 October 2018 via Park The Van Records. The band’s fourth album is loaded with thoughtful, nuanced rock and roll with an art school spirit and a punk rock heart. The songs reveals their fly-on-the-crumbling-wall vision of our moral climate, complete with a reenergized, accessible sound and the charmingly sardonic, smiling-while-sneering delivery of singer and bandleader Ryan Lindsey.

The band shared a hugely ambitious and visually stunning 12-minute video for their new double single “Sandman” and “Boys Got To Go”, directed by renowned photographer and filmmaker Pooneh Ghana, who explains further about the video: “It follows a man’s journey of self-realization as he breaks down and breaks through his own wall. He slowly finds the strength to start over and face life with a new outlook and clarity. He truly embraces life again.” Watch it now HERE. Bad Behavior is now available for pre-order HERE.

The video has garnered over 23K views thus far and the singles have already received some excellent traction on Spotify, with over 110,000 plays for “Boys Got To Go” and 70k on other services. Spin said; “Broncho’s psych-pop innuendo is stronger than ever on ‘Sandman’… a blurry electric blues punctuated by lusty trills and stinging guitars. The folkloric Sandman sprinkles magic dust and brings dreams to sleeping children”.

Ryan Lindsey (vocals/guitar) and the band—Nathan Price (drums), Ben King (guitar), and Penny Pitchlynn (bass)—are a tight unit who have seen their songs featured at influential TV and radio and have toured the U.S. and Europe, including arenas with the likes of Queens of the Stone Age, The Growlers, Portugal The Man, and Cage The Elephant. In the gritty warehouse district of Downtown Tulsa they have carved out a physical place for themselves, an industrial blank space where BRONCHO can experiment with sounds, performance, visuals, and more. It’s where they recorded Bad Behavior with producer Chad Copelin in the first half of 2018, a controlled process that allowed them to work at their own pace and by their own standards, almost like a secret club.

Bad Behavior slinks and purrs with a sense of lascivious flirtation. Lindsey sings with a mischievous twinkle in his voice, peppering his verses with suggestive uh-ohs and ahhs and at times barely pushing out his words to the point of whispering. The lyrics match the primal pulse of the songs’ moods and vibes, and their pop sensibilities create a world where T. Rex, Tom Petty, The Cars, and The Strokes collide. The record is filled with references to religion, sin, drugs, vice, and scandal bubbling just under the surface. It’s a palette familiar to anyone who has ever turned on the evening news.

Can all this unsavory activity exist without taking sides? Lindsey holds tight to his role as a relayer and is comfortable with leaving it to the audience to cast their own lot. “We’re assuming that everybody is coming from a certain set of values, but ultimately that’s impossible,” he says. “The best news is just a report of what’s going on, without bias. This record is a non-biased, non-profit reporting on what’s going on in the world. Part of it’s an exploration in solving those problems, on a personal level and ultimately on a cultural level.”