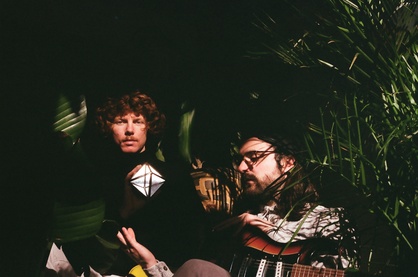 Sea Moya
New album ‘Falmenta’ out October 12th
Listen to ‘The Long Run’ HERE
“fuses together the pysch-pop elements of Tame Impala and the pulsating rhythm found in Jungle’s early singles to form an ejaculation of afro-psych pleasure” – Noisey
“The German trio specialise in swirling, hazy electronic funk, and are equal parts krautrock and psych” – The Guardian
Following the astounding reception of their 2015 EP, German psychedelic electronica trio Sea Moya are pleased to announce their expansive debut album, ‘Falmenta’ out on October 12th.
Recorded in a reclusive cabin in the Italian Alps above Lago Maggiore, the album is the result of total withdrawal from everyday life, the distraction of technology and any influence from outsiders. In this time the band were able to completely immerse themselves in their surroundings as well as introspectively, bouncing ideas off one-another until their creative output was very much as one. Every song and the lyrics written became a collaborative effort resulting in an album that is both surprisingly experimental and effortless in its presentation. This time was both intense and unique, making ‘Falmenta’ the bands most personal release to date.
The album is inspired by a wide-ranging and unexpected group of influences, an eclectic mixture of Krautrock, Afrobeat, and Electronic music. Sea Moya bring a lysergic haze of electronic funk, intertwined with vocal harmonies, playful experimentation and kraut rhythms to the most thrilling effect. Filtering analogue instrumentation through tape saturation, modular systems, and a vast array of effect pedals, this psychedelic beat outfit reshapes and cuts up their original ideas, thus producing a distinctive sound that is even reflected in their unique aesthetic.
You can hear echoes of the multi-instrumental psych of Tame Impala and the easy electronica of Toro Y Moi, just as much as William Onyeabor’s deconstructed African disco or J Dilla’s hazy production. New single ‘The Long Run’, is a perfect example of their beat-driven, rhythmic and genre-defying sound.
Following the recording of ‘Falmenta’, the band relocated to the vibrant Montreal and have embedded themselves into the thriving DIY underground there, playing shows across Canada and the US (including SXSW) and recording a live session with Music Is My Sanctuary at the Phi Centre.
Of the spontaneous move, the band tells us “At that time we listened to a bunch of great artists from Montreal like Homeshake, TOPS, Suuns or Project Pablo. It felt like there was a free spirited and open-minded music and arts scene going on. Even though none of us had ever been to Canada before, we just decided to give it a shot.
And here we are, moved in early 2018, already played a whole bunch of shows in Canada and the States, dived into the music scene in Montreal which is incredibly rich of DIY spirits, mesmerizing artists and an amazing mixed-up and buzzing culture of ALL couleurs. It feels like you can find your spot for every tiny niche you want to experiment with and all that pretty easy going and not too serious. It’s an inclusive and yet far out scene which makes it wild, buzzing and forward thinking. The move to Canada has been one of the most inspiring steps we took in our lives for now.”
Sea Moya was formed in summer 2014 in between shipping containers in a German harbor. Current band members are David Schnitzler (Vocals) and Elias Foerster (Bass), and the recent live addition of Tilman Ruetz (Drums), + a whole lot of synthesizers.
Live Dates:
16.08. Berlin – Urban Spree (Elias Agogo DJ set)
18.08. Berlin – Zuckerzauber (Elias Agogo DJ set)
18.08. Hamburg – Müssen Aale Mit Festival (Elias Agogo DJ set)
24.08. Amsterdam – Red Light Radio Live Set (Elias Agogo DJ set)
01.09. Cologne – C/O Pop Festival (Elias Agogo DJ set)
Follow Sea Moya:
Facebook