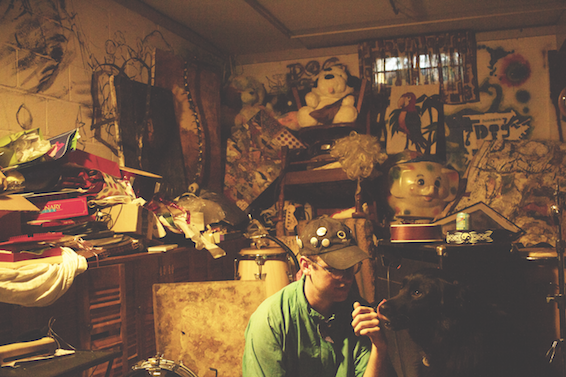 DUE OUT OCTOBER 5TH VIA EXPLODING IN SOUND RECORDS

Exploding In Sound Records is thrilled to share the incredible and ultra-weird sophomore album from New Jersey’s Fond Han. The album, Wronked, due out October 5th via EIS (LP/Digital) is a wild ride to say the least. It’s jaw dropping, a record that darts around with manic energy while tackling the heaviest of topics and depressive forces in a way that only comes natural to Fond Han’s Thomas Baumann. Wronked is that magical kind of experience that has you believing everything is unpredictable yet anything is possible.

“See-sawing between moments of quiet rumination and big surges of urgent instrumentation, “Wronk” is a jumpy, densely layered knot of manic energy. The song starts off woozy and ominous before spilling into a deluge of free jazz blasts and post hardcore bursts. They beam in distortion and synth like lasers, pinpointing perfect spaces to fill with extraterrestrial fuzz.” Biography (written by David Anthony):Wronked, the second album from Fond Han, is jarringly creative and wildly adventurous. And it almost didn’t get made. There was no plan to record a new Fond Han album. That is, until band leader Thomas Baumann was met with an offer he couldn’t refuse. Seth Engel of Pallet Sound, and driving force behind the band Options, invited Baumann to come to Chicago and record everything he had bouncing around in his head. So, over a marathon five-day session, Baumann and a series of collaborators built the second Fond Han record from the ground up, creating a work that’s dense and dark, but uplifting when taken in full.

Songs like “Wronk,” “Ughed,” and “Shuffled” plumb the depths of Baumann’s psyche, exploring topics such as addiction, mental illness, and the breakdown of personal relationships over the past couple years. The songs strike a balance between the band’s heavier, noise-flecked elements and a gentler, aching approach. “It’s darker than the last record,” says Baumann. “When we were finishing up the week of tracking I remember listening to everything and thinking, shit… this is too depressing. It made me feel pretty terrible hearing all of it, knowing I was responsible. Wondering what use surfacing and fossilizing these emotions could have, why would I want to share this with people I don’t know? Why dump this gloom on the people I do?”

That act of throwing all his weight into the project gives Wronked the sound of an exorcism. Along with longtime collaborators Kira Mcdonald and Alex Molini, Wronked is uncompromising in scope, aided by contributions from a lengthy cast of characters, including Al Costis, Conor Mackey and Collin Clauson of Monobody, Sen Morimoto, and Michael J. Thomas. With all these parts added together, there is no single entity driving each song. Instead, they swirl and fracture with a manic glee that keeps the listener on edge and invested in every move.

With Wronked, Fond Han made a record that reframes Baumann’s feelings about modern popular music, allowing him to venture further into his own work as a result. “I am inspired a lot by music that does nothing for me or bores me—It fuels my desire to create the music I want to hear, the feelings I would like to receive from a performance, the mood I would be interested in.”

By taking the worst of the worst, Baumann was able to create his very best with Fond Han. With no expectations, he was able to throw himself fully into the work, and come out the other side with an album that’s singular in both intent and scope. Wronked is a brutalizing listen, but one that becomes fulfilling and enlightening when taken in full without a single preconception.