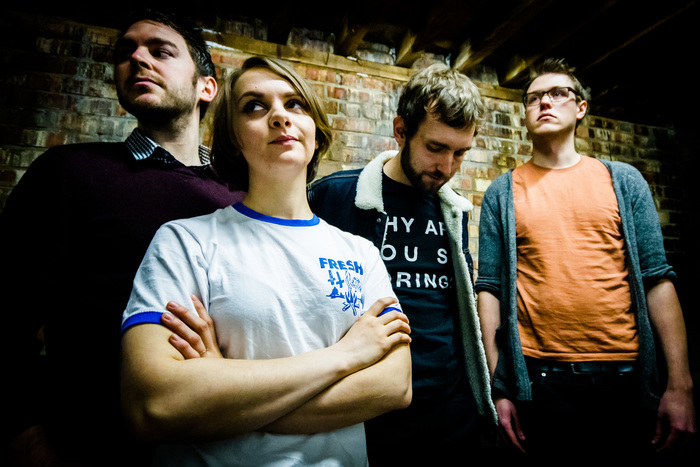 Fightmilk
Announce debut album Not With That Attitude
Due out on 2 November via Reckless Yes
Album launch live date:
2 November – The Shacklewell Arms, London (free entry)
Harnessing a great catchphrase in to an excellent album title, London four-piece Fightmilk are due to release their debut album Not With That Attitude on 2 November 2018 via Reckless Yes.  Fightmilk are Lily, Alex, Adam, and Nick – a four-piece from London who formed in the wake of broken relationships and an uncomfortable year spent living at home at the age of 25. They create sweaty, loud, shouty pop songs about crushing hard, acting out, and running away to solve crimes in Sweden. Blending acerbic lyrics with riffs galore and the urge to dance when you least expect it, Fightmilk revel in a certain inexplicable 90s nostalgia.
They shared the first single from the album, “Four Star Hotel“, via Clash, who described it as; “an itchily infectious guitar pop thrill.”
With “Four Star Hotel” Lily and Alex explore the ending of the relationships with their respective long-term partners (which was the catalyst to forming the band). Coincidentally both couples had booked vacations in Amsterdam towards the end and each realised that a holiday will never save a relationship. As Alex explains; “almost every line is based on one of our two true stories, from the shit-eating grins in the holiday photographs to having to push two twin beds together in a hotel room.”
Fightmilk formed in 2015 when lifelong friends Lily Rae and Alex Wisgard were both made romantically redundant at the same time. They realised there was too much angst, too much Kirsty MacColl, and too many drunk nights of making up fake band names for them not to be in a band together. They began writing songs, partly as a way to work out some of their issues and partly so that they could reference It’s Always Sunny In Philadelphia. Moving on from just the two of them and a drum machine called Elton that they couldn’t figure out how to operate, they were joined by Nick Kiddle on drums and Adam Wainwright on bass (who was also handy at piano, cooking dinner and making electronic music in his bedroom under the name of Future Wife).
They released two EPs, the self-releasedThe Curse Of Fightmilk in 2016 and Pity Party via Fierce Panda. As both EPs sold out, they released a compilation of the two, plus two bonus tracks, called Both Types of Hayfever in early 2018. They have shared the stage with Desperate Journalist, Worriers, Dream Nails, Spearmint and Skinny Girl Diet (amongst many others) and toured Germany. Securing radio support fromSteve Lamacq on BBC 6Music and John Kennedy on Radio X they also received enthusiastic Twitter reactions from Helen Love and Eddie Argos. In a more unusual booking, they were recently the live support act for a screening of the film 10 Things I Hate About You.
Whilst the first batch of songs were borne out of unceremonious life circumstances for Lily and Alex, for their first full-length album, they found that their personal lives were in marginally less in the doldrums. This meant that they were able to tackle issues more objectively and work through a lot of problems over the course of the record.
A joyous gem of a record, Not With That Attitude was recorded at Dean Street Studios in Soho with Keith TOTP across four stolen weekends over a two year period. This gave the band time to hone their songwriting, iron out the kinks and spend time over the mixing, so that it sounded meatier and more polished than their previous recordings. Drawing on bands such as Weezer, Sleeper, The Long Blondes, Martha, Charly Bliss, Diet Cig and Johnny Foreigner, Fightmilk have carved out their own sound and place in the musical universe to add a bit of joy, angst and humour to everyday existance.

Fightmilk
Not With That Attitude
Tracklisting:
1. How You Move On
2. Get A Grip
3. Lucy
4. Summer Crush
5. Dream Phone
6. Not Going Anywhere
7. Four Star Hotel
8. Over
9. Solving Crimes in Sweden
10. Your Girlfriend
https://fightmilkisaband.bandcamp.com
http://recklessyes.com/