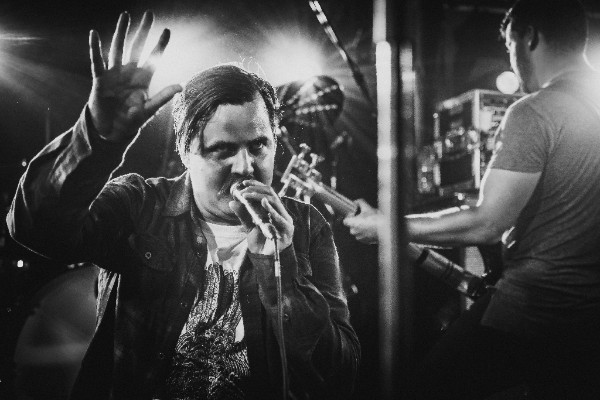 The brand new, 2nd album ‘All That Divides’, set for release on October 5th through Rise Records/BMG

The band on a full UK and European headline tour in Oct/Nov, London Underworld show now SOLD OUT

Following on from the recent headline dates, UK tour with Marmozets, European tour with A Perfect Circle and headlining 2000trees Festival 2nd Stage, BLACK PEAKS will be playing a host more summer festivals including ArcTanGent and Reading and Leeds

Brighton 4 piece BLACK PEAKS have released their huge, brand new single ‘Electric Fires’. It is the 3rd new single this year, and the band will be releasing their hugely anticipated, Adrian Bushby produced (Grammy award winner for Muse, Foo Fighters) 2nd album ‘All That Divides’, on October 5th through Rise Records/BMG.

From BLACK PEAKS front man Will Gardner on the new single ‘Electric Fires’:
‘Electric Fires was one of the first songs we wrote for All That Divides, and was one that had a few live outings towards the end of the Statues tour. The song in many ways is one of our most straight-forward. Lyrically the song is a bit of a sarcastic comment on the beliefs of certain conspiracy theorists, Flat-Earthers etc. Essentially we just had fun with that idea, and wrote a song about how our Alien forefathers came here from Mars at the dawn of civilisation to build the pyramids, which, of course, 100% totally happened. Stay woke, kids.’

The band have already released the singles ‘Home’ and ‘Can’t Sleep’, and the later was a Radio 1 Rock Show Rockest Record and Huw Stevens Single Of The Week in April, and is the opening track on ‘All That Divides’. Full album track-listing below:

Will Gardner on ‘All That Divides’ – “Lyrically at least, this album represents the fear of a future where freedom is restricted. Over the last two years, we as a band have been incredibly lucky to have been able to travel accross Europe and play our music. The fact this happened to take place during a period where various political changes, at home and abroad, made us focus a lot about the freedom and right to travel. We have seen people, families, relationships and countries divided by conflict and political upheaval, and our reaction to this is a core lyrical theme running through the album.”

‘All That Divides’ is the follow up to the 2016 debut album ‘Statues’, which was universally acclaimed, saw the band play-listed on Radio 1 with ‘Saviour’ and tour across Europe with the likes of Architects, Mastodon, System of a Down, Prophets of Rage and Dillinger Escape Plan.

Live wise, the band will also be on a full UK and European tour after album release, with some incredible supports in tow. ALL dates and supports are below, with Worthing and London already SOLD OUT:

The band have already toured with A Perfect Circle across Europe, recently completed a set of small, low key, sell out UK headline dates as well as a UK tour with Marmozets AND a special one off show for BBC Radio 1 in Swansea, as a headliner for their Biggest Weekend Fringe Festival/event. This summer, the band will be playing a host of UK and European festivals including ArcTanGent (August) and Reading and Leeds (August). These follow their epic slot headlining the 2000trees Festival 2nd stage (The Cave) in July and last weekends 2nd stage headline slot at Fat Lip Festival.