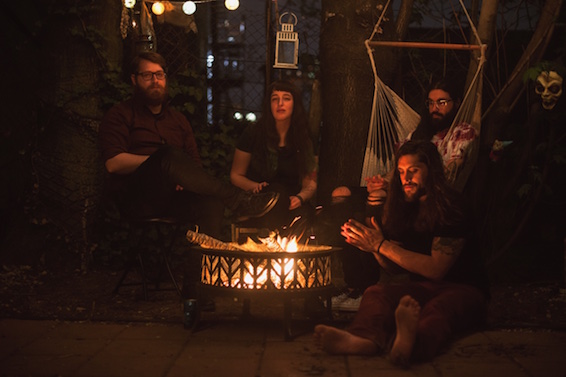 Brooklyn’s Baked are sharing new single “A Hartlett Anthem” today via Stereogum, the second preview of the band’s eclectic new EP, II. Due out August 24th via the Exploding In Sound’s Tape Club, the song finds the band at their best, with enormous swirling pop melodies and fuzz so thick it could swallow you whole. II is a chance for Baked to try new things and push their songwriting, encouraging collaboration more now than ever before.

Stereogum premiered the single, calling it “a hazy, slow-moving trip of self-doubt and nostalgia, perfect for when you feel like you’re just stumbling through life. Baked does sleepy devastation amidst heavy, grungy guitar riffs with as much passion as they always have.”

“‘A Hartlett Anthem’ is a song about various personal & emotional struggles. From trying to write when writer’s block sets in, to chasing a feeling or an idea from a younger, simpler time. Self-doubt, difficult self-examination, often even feeling lost in the current of this brave new world that exists in fiber optics and brazen opinions. ‘A Hartlett Anthem’ is a note to the author – half cautionary / half ‘remember when?’ – deeply inspired by the fantastic writing and perspective of a very dear friend who always seemed to truly and deeply ‘get it’ when it came to music or just life in general.”

The band will be out on tour in support of the EP together with label mates Bethlehem Steel this August and September. All dates can be found below. Biography:Perennial masters of Jazzmaster fuzz and dense classic-rock-meets-shoegaze burners, Baked return with a stunning new EP, known in most parts simply as ‘II‘. Recorded together by the band – R.J. Gordon (guitar/vocals), Isabella Mingione (keys/vocals), Jeremy Aquilino (bass/vocals), A.J. Pantaleo (drums) – and frequent collaborator Adam Reich (Shea Stadium, So So Glos, Bueno), the quartet take a step back from the slicker sound of Farnham. Their onslaught of guitars, keys, and layered melodies sound brilliant in the hazier textures, expanding their sound while keeping a raw live intensity. Baked recreate rock in their own image, thick, blown out, twangy, sleepy, and casually devastating with a stoned ease.

II offers a glimpse into all the elements that have come to define Baked. There are faster paced, heavier songs. There are mellow and laid back songs. It is the first record where all three of the band’s songwriters have at least one song, including Aquilino’s “lead vocal” debut. The process was more collaborative than ever before. Gordon shared, “We worked on song form and part writing together to help each songwriter get what they were striving for.” It’s an eclectic record, even at five tracks, but the writing is unified by the personalities at play. With themes that include tumultuous relationships, introspection, and self-doubt, each song has its own unique urgency.

Recorded at Little Eagle Studios, a home studio in the quiet New York suburbs, and the big guru Adam Reich’s Second Base Studios in Sunset Park, Brooklyn, the band relied on each other to flesh out their ideas, and capture that undeniable sonic spark that rips through songs like “A Hartlett Anthem,” “Coma,” and “Hope You’re Happy.” Gordon mastered the record in his Maspeth apartment, affectionately named Angelo’s Pizza after the pizzeria that he lives above. It’s another cloud of slow burning jams and distorted rippers, with all the idiosyncratic charm you’ve come to expect from Baked.