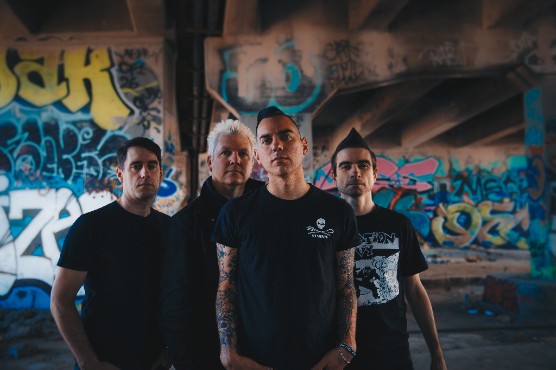 On Tour Now With Rise Against and AFI

Pittsburgh political punk band Anti-Flag are now premiering their new music video for “American Attraction” via BrooklynVegan. The song comes off of their recently announced album American Reckoning, set to be released on Spinefarm Records on September 28th. The album features acoustic versions of songs from their past two albums, as well as covers of songs that inspired them. The video was filmed in the band’s hometown of Pittsburgh, PA, and directed by Josh Massie and Anti-Flag. Pre-orders for American Reckoning are available via Spinefarm Records. Anti-Flag are playing two festivals, a hometown show at Four Chord Festival in Pittsburgh on August 26th along with Less Than Jake and Bayside, and Blue Ridge Rock Festival in Concord, VA on September 2nd. The band will then continue their full US tour with Rise Against and AFI through September. Tickets for all shows can be purchased here and a full list of dates can be found below.
Watch Anti-Flag’s video for “American Attraction” via BrooklynVegan.
American Reckoning, the new acoustic album from Pittsburgh political punk band Anti-Flag, strips down some of the band’s latest hits to get to the heart of the message. The album features acoustic versions of songs off of their last two albums, American Spring (2015) and American Fall (2017), as well as covers of some of the classics that inspired them. By arranging these songs together, American Reckoning functions as an account of one of the country’s most tumultuous political times told by some of music’s sharpest political minds.The American series, all released on Spinefarm Records, showcases why Anti-Flag is recognized as a staple in punk rock. Known for their left-wing politics, focusing on anti-war activism, imperialism, class struggle, human rights, and various sociopolitical sentiments, Anti-Flag have proven themselves as both dedicated activists and accomplished musicians since forming in 1993. Decades of strong political ideals and rousing punk rock songs have allowed the band to assemble a devoted fan base of likeminded individuals all across the world. A quote from the band on their new album can be found below.

“When you’re a band that has been together as long as Anti-Flag has you take nothing for granted. We have far exceeded any personal expectations we have had for the band, our art and the reach that it has had. This chapter of our band started with the hope of American Spring, the anger of American Fall and comes to cessation with American Reckoning…

This piece focuses on songs from both records (Spring/Fall) that we felt maintain their relevance, even in the distraction politic Donald Trump America, where issues and truth are distorted in a seconds time. We also wanted to provide insight into our influences that lead us to write the records, that’s where the covers come in. They are songs that people may not expect to be influential to Anti-Flag records but either in their messaging or sonics they were tremendously impactful to us as individuals and hence the song writing process.

We can not be knee jerk reactionary to a president that uses corporate media to endlessly lie, we created statements and art that we feel directly combat these tactics, American Reckoning has allowed us to revisit some of those previous statements and shine new light on them.” – Anti-Flag

Anti-Flag have recently announced a UK/Euro tour this fall with Silverstein, Cancer Bats, and Worriers, as well as two ANTIfest indoor festival shows. ANTIfest is the band’s own festival they have hosted in various locations in Europe, UK, and the U.S. since 2012. Lineups and other information for the fest can be found below, along with a full list of tour dates.

American Reckoning was recorded in Pittsburgh, PA, and mixed and mastered by long time Anti-Flag engineer Justin Francis. The album’s artwork was designed by Doug Dean, who also did the artwork for both American Spring and American Fall.

American Reckoning Track Listing
1. The Debate Is Over (If You Want It)
2. Trouble Follows Me
3. American Attraction
4. When The Wall Falls
5. Racists
6. Set Yourself On Fire
7. Brandenburg Gate
8. Gimme Some Truth (John Lennon cover)
9. For What It’s Worth (Buffalo Springfield cover)
10. Surrender (Cheap Trick cover)