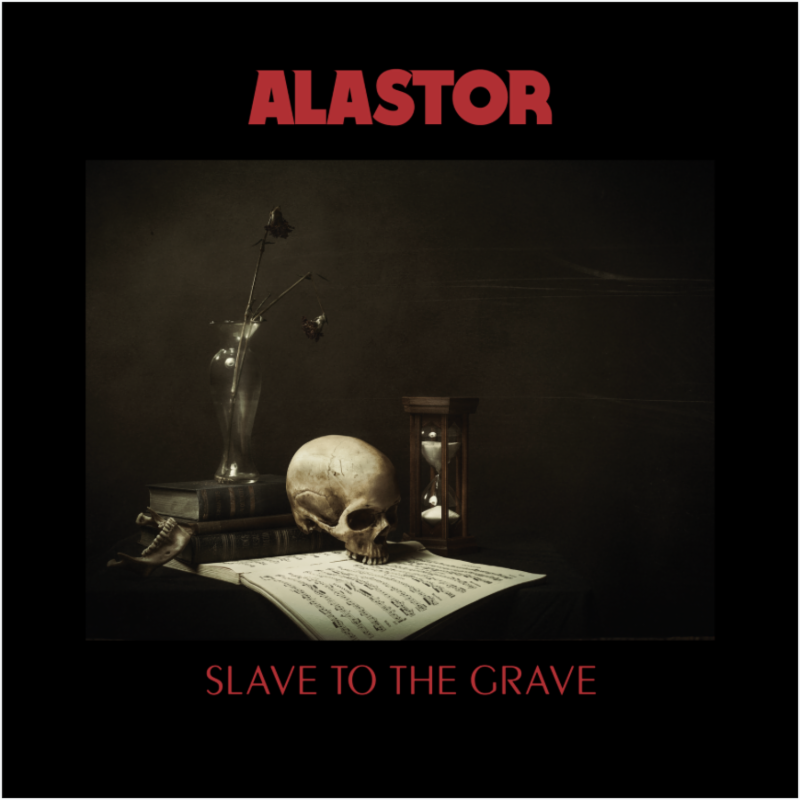 Alastor hearken to the days when heavy rock was the music of the rebel, the occult adherent and lurker in the shadows, not hipster bros. Theirs is the doom sound for those who discovered it on the edge of town, in the cold rain, perhaps, as an escape from the squares who’ll never understand.
Alastor is heavy doom rock for the wicked and depraved. Drenched in heavy, distorted darkness and steeped in occult horror that will make your skin crawl and ears cry sweet tears of blood, Slave To The Grave pulls no punches in the Swedish band’s unabashedly bleak themes.
“It’s an album that circles around the concept of death,” explains lead guitarist Lucy Ferian. “It’s about death in both its spiritual and personal meaning — how death is a part of our everyday life. How it affects our thoughts and actions. How some of us spend our entire life in fear of death, while some seek it. But no matter how you live your life and no matter what you achieve here on this earth. You are still just a slave to the grave.”
Alastor formed under a bad moon in 2016, consisting of Dharma Gheddon (vocals, bass, acoustic guitar and organ), Lucy Ferian on lead & acoustic guitar and organ, Terry Fying on guitar and Levi Athan on drums. Yes, those are their given birth names, why do you ask?
The quartet released its epic 3-song debut album Black Magic in early 2017 via Twin Earth Records, followed by the 2-track “Blood On Satan’s Claw” EP on Halloween the same year. Joining forces with RidingEasy Records in 2018, Alastor hunkered down to summon the 7-track hateful gospel Slave To The Grave with engineer Magnus Sörensen.
The album opens with the dramatic spoken intro “I döden är vi alla lika” (In death we are all equal) backed by rolling thunder and a clanging church bell to set the stage for the rumbling dirge “Your Lives Are Worthless.” Forlorn vocals and drop-tuned guitars seep like murky syrup as the song slowly morphs through varying riffs across the nearly 10-minute song as it builds to an epic crescendo of squealing guitar notes and pummeling half-tempo drums. “Drawn To The Abyss” is a swinging anthem punctuated by haunting backing vocals and scraping wah-wah guitar sounds leading into a powerful double-time outro. “N.W. 588” is the hook-laden melodic centerpiece sounding like an apparent nod to Technical Ecstasy leading into the flamenco-themed acoustic ballad “Gone.” The anthemic album title track rings out with pliant lead guitar notes countering the dark lyrics and behemoth, propulsive rhythms that can only foreshadow the heft of 17-minute album closer “Spider of My Love” which brings the album to a fittingly massive and funereal close. Perfect.
Slave To The Grave will be available on LP, CD and download on Halloween, October 31st, 2018 via RidingEasy Records. Pre-orders are available HERE.
Artist: Alastor
Album: Slave to the Grave
Label: RidingEasy Records
Release Date: October 31, 2018
01. I döden är vi alla lika
02. Your Lives Are Worthless
03. Drawn to the Abyss
04. NLW 588
05. Slave to the Grave
06. Gone
07. Spider of My Love
On The Web:
facebook.com/alastordoom
alastordoom.bandcamp.com
ridingeasyrecs.com