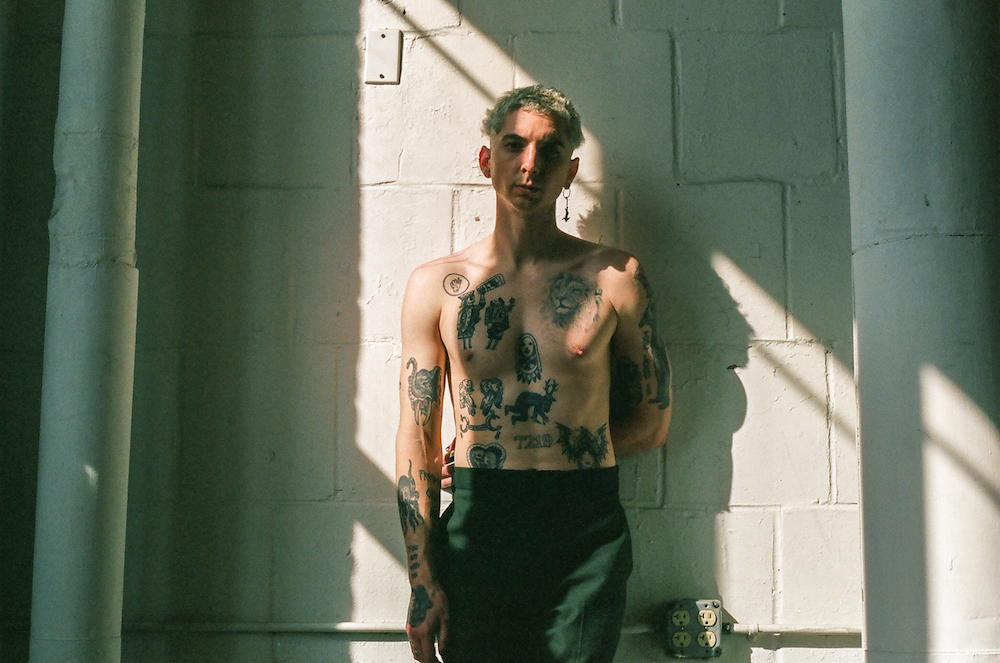 Ahead of the August 17th release of ‘Mulberry Violence’, the Boise-based creative force Trevor Powers has shared a new couplet of songs from the album; the stomping “Clad In Skin” and the disquieting “Squelch.”

Of the tracks, he comments:

“Death like a rattle in one hand, Life like candy in the other; shake one to scare you, offer one to make your mouth water.” I noticed Ray Bradbury’s Something Wicked This Way Comes peeking out from the sci-fi endcap at a discount bookstore in rural Washington a few years back. After scanning the pages and reading that line, I bounced eight quarters on the counter like a six-year-old with mad money and got back on the highway. Driving until dark, I pulled into the first hotel that didn’t resemble a villainous sex den, received the room key from a twitchy, impressively stoned desk clerk named Gregory, and opened the door to my room only to find the bed was half the size of my body and the thermostat was stuck at frigid. But as I curled up like a homeless poodle and started reading, every wine stained page of that book put me under a spell. I was in Green Town. I saw it all. I escaped by sunrise, appeared back in room 116, ate a stale Reese’s, and crashed out on my dog bed by 7 am.

Clad In Skin and Squelch were birthed by the belly of that book. Bradbury’s story is centered around a traveling carnival concealing nightmares within a semblance of fun – so I figured it needed a soundtrack. Over the span of a few months, I worked up an entire score for it, but these were the only two pieces that survived. One is the candy; the other.. the rattle.

Trevor Powers initially announced his new self-titled recording venture in May with the video for “Playwright,” “an icy electronic number” (Pitchfork), closely followed by the ‘Mulberry Violence’ album announcement and the first couplet of tracks; the creeping bass-heavy “Ache” and the shattering, melancholic “Plaster Saint,” “both of which are skittering and ornate and churning in darkness.” (Stereogum). In late June, Trevor shared the second couplet;“XTQ Idol,” inspired by a visit to the Sedlec Ossuary during a trip to the Czech Republic and the exploratory“Dicegame” that “takes on a more widescreen sound, cut through with a searing synth wail.” (The FADER).

With 7 of the album’s 10 tracks now out in the world, listeners have plenty to delve into ahead of the AMA that Trevor will participate in via the /r/indieheads subreddit on Tuesday, July 31st at 8pm BST!

More about Trevor Powers:
Trevor Powers (born March 18, 1989 in San Diego, CA) is an American musician, producer, and composer based in Boise, ID. He began recording music in 2011, releasing a trilogy of albums under the moniker Youth Lagoon before announcing the end of the project in 2015. While taking crash courses in classical theory, jazz, and ancient modes throughout the time that followed, Powers started making music experiments inspired by the visual works of artists such as Francis Bacon, Sister Gertrude Morgan, and Harry Clarke. Lining his walls in crude print-outs of pictures, he found graphic saturation helped inform the social and spiritual themes of his music.

Mulberry Violence is out August 17th on Baby Halo.  Pre-order it HERE.