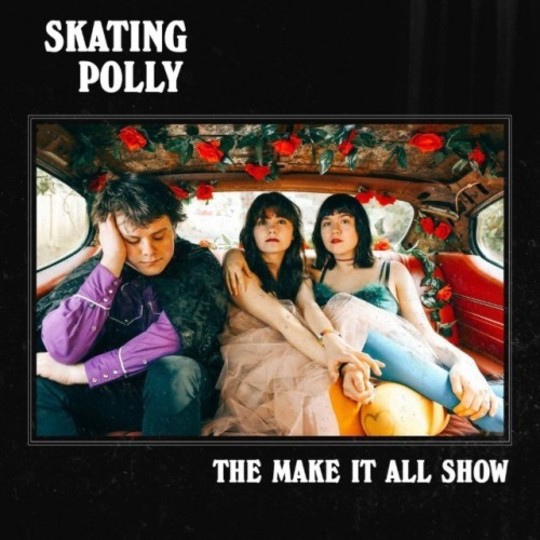 The Make It All Show

Indianapolis based alt rock band Skating Polly take the influence and attitude of bands like L7, The Breeders, Jack Off Jill, Bikini Kill and the pairing of Veruca Salt and X both of whom members of these band have worked with Skating Polly in the past), and the biggest influence of all on the band, Babes In Toyland and combine all these influences and inspirations with a knack for melodies, dual vocals and catchy hooks all of their own making to create an infectious vibe that is tailor made for singing and dancing along to.

The trio that consists of Kelli Mayo, her brother Kurtis Mayo and their step-sister Peyton Bighorse making this a real family affair and also a big noise that can sometimes appear somewhat bittersweet but never anything less than energetic and on the songs on The Make It All Show, they tap into something that is certainly life affirming and positive throughout.

As the band launch into the energetic Classless Act, it is clear that they have the well crafted songs to match their energy and this continues throughout the album, an album that is packed full of highlights. Those highlights include the slower paced and more downbeat Little Girl Blue And The Battle Envy, a song that is reminiscent of Regina Spektor, the legendary Exene Cervanka fromExene Cervanka (who is a kindred spirit ofExene Cervanka and has worked and toured with the band in the past) featuring catchy punk indebted riot that is Queen For A Day, the rocking Long Ride, the quirky This Vacation and the delicate closing number Don’t Leave Me Gravity, a smog that sound like the greatest song that Tori Amos never released but really the album is a succession of highlights and the album as a whole is a joy to listen to.

The production on the album by noted veteran Brad Wood (who has worked on albums by Liz Phair, Tortoise, Far and Royal Trux and who proved Skating Polly’s last release New Trick) captures the bands sound and vivacity perfectly and you can definitely see why working together again was a match made in heaven.

The Make It All Show is a catchy and memorable album jam packed with songs that will uplift your spirit but ones that pack a bite- as well as being some of the catchiest that have been heard this year.