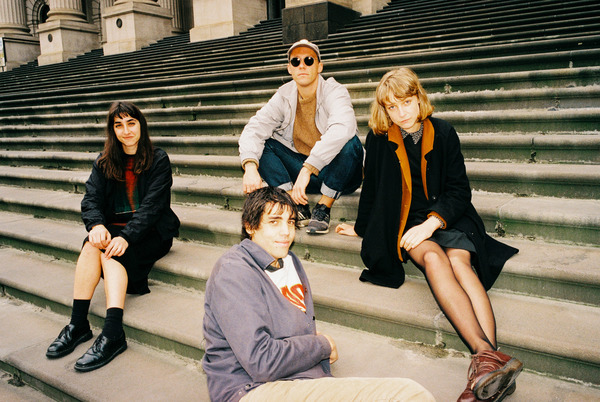 A To X is the second album by Melbourne anxiety-pop quartet School Damage. The new album (due out on 31 August via Chapter Music) focuses their simultaneously sharp and wobbly DIY pop aesthetic, taking in the wooziness of Young Marble Giants, the bite of Devo and the busy melodies of the Television Personalities. They shared the video for the first single “Assimilate” via Brooklyn Vegan, who described it as their, “askew, discordant but catchy brand of pop.”

Carolyn Hawkins from the band explains further about the song:
“‘Assimilate’ came out of a sense of frustration at being a girl that does music stuff, and not knowing where I stood on the whole issue – like join the crowd or oppose it? The feeling of being part of a scene, but kind of not feeling a part of it as well. And then whether to argue against it, or just try to do your best within it, and then this feeling that I am part of the problem too. I didn’t know how to approach it, I still don’t. But also it’s okay to be confused too and to not know all the time.”

A To X comes hot on the heels of School Damage’s instantly loveable self-titled debut from 2017, which earned the band raves from Brooklyn Vegan, Noisey and BBC 6Music among others.

Formed as a bedroom pop project for Carolyn Hawkins (Chook Race, Parsnip) and Jake Robertson (Ausmuteants, Hierophants, Frowning Clouds), School Damage now include Jeff Raty on drums and Dani Damage on bass. They have released cassettes and 7”s on various labels, including a recent 7” for UK label Upset The Rhythm. They’ve played King Gizzard’s festival Gizzfest and shared stages with The Bats, Tropical Fuckstorm and NO ZU.

About the new album, Carolyn says: “A To X is about trying (and failing) to find patterns in the overwhelming jumble of activities involved in being alive. We were going to call it In Alphabetical Order but I guess we never quite made it to Z!”