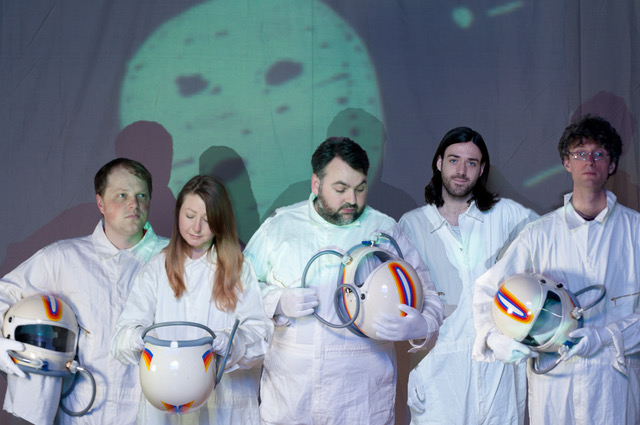 ‘THE MOUNTAIN FORCES THE FUTURE, AND THE FORCE CAUSES THE RAIN’ WILL BE RELEASED 28TH SEPTEMBER

Wakefield / Leeds quintet Mi Mye have shared new single ‘Ok So’, the first to be taken from their fifth studio record ‘The Mountain forces the Future, and the Force causes the Rain’, out on their new label Coble Records on the 28th of September.

Mi Mye is a lush collection of snapshots from the north coast of Scotland, where principal songwriter and lyricist Jamie Lockhart grew up, and Wakefield, the place he now calls home. Though for years a solo project with a revolving cast of musicians, Mi Mye has now settled on one permanent line up, with Jamie joined by Rob, Emily, Chad & Morgan (The Spills, Crake, Buen Chico) who now all contribute their unique influences and voices to this beautiful collaboration. Mi Mye make music which is often tragic but always hopeful, something which has earned them comparisons to bands like Sparklehorse and The National.

Following on from 2016’s acclaimed ‘The Sympathy Sigh’, which was supported heavily by BBC 6 Music, The Line of Best Fit, The 405, Clash & many others, new album ‘The Mountain forces the Future, and the Force causes the Rain’ takes its name and theme from two mountains very close to where Jamie grew up in Skerray, ‘Ben Loyal’ and ‘Ben Hope’.

Ever an observer, a number of the stories on this record have been picked up from strangers overheard in Wakefield and Leeds – the man whose stroke prevents him dancing with his true love, the passenger on the bus losing his temper and revealing he had seen someone die that morning, a young adult showing off to friends and inadvertently ruining someone else’s day.

New single ‘Ok, So’  focuses on the thinking time between an intake of breath and the giving of advice. “Ok, so” is just the same as “ummm”, but adds gravity to the ensuing advice, which can change everything.

Jamie muses on a conversation overheard, a tired professional on a Friday evening giving advice to someone on the phone – “ok so, the best thing you can do right now is leave” – and the possible extremes of the situation. It could be advice to a colleague whose email won’t send after a hard week of work – “go home and enjoy your weekend, we can sort this on Monday”. Or it could be a breakdown of a wonderful relationship that has gone wrong, and the advice is more “you have to change your life and the lives of your loved ones around you. It might break someone’s or lots of hearts” all within the time it takes to say “ok, so”.

Mi Mye will be heading out on tour in Sept / Oct with dates TBA.

Press Quotes:
“Each song has a nakedly personal element, yet it never feels self-indulgent” – CLASH

“Reminiscent of the work of Sparklehorse and Bright Eyes. Think wedding band at the end of a long night playing to a few last stragglers (in the best possible way)” – Killing Moon