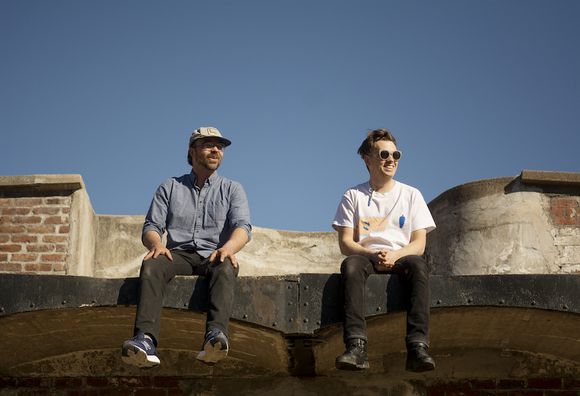 The sonic landscapes conjured by JOYFULTALK reflect a curiosity; a tinkered lightfield of forward motion, a maniac’s grove. The brainchild of composer and instrument builder Jay Crocker, JOYFULTALK is without a doubt the most forward-thinking musical act to emerge from the rural outpost of Crousetown, Nova Scotia. Along with fellow compatriot, Calgary transplant and multi-instrumentalist Shawn Dicey, the duo conjures unlikely technicolor material marred as much by the astral plane as by the pair’s rugged maritime environs. With Plurality Trip, JOYFULTALK‘s second full-length album, Crocker’s jazz-fried visions are as starry and precarious as ever.

After a fabled career as an avant-improv regular and go-to homespun producer in Calgary throughout the early aughts, Crocker relocated to Crousetown, a blink-and-you-miss-it hamlet, with his family in 2011. Landing in a grandiose, piecemeal residence tucked in the treeline along the Petite River, Crocker found himself brainlocked: without a music community to partner with, without a social outlet, without economic stability, without any surrounding momentum. To compensate and keep from depressive isolation, Crocker began inventing his own musical partners (The Pink Dolphin, The Cheadle, etc.), a cast of modded synths and cobbled instruments to help realize his own stirring sense of creative unbalance. The resulting material became 2016’s MUUIXX, JOYFULTALK’s first full-length, a record spoken of in hushed tones of reverence, championed for its unlikely Cluster-meets-RZA micro-grooves.

Following a smattering of high praise, a few major Canadian and European dates, a couple of home plumbing jobs, some gnarly car repairs, the creation of the Planetary Scoring System (Crocker’s own conceptual scoring methodology) and the construction of BIBELOT (a custom-built, gallery-ready set of sixteen ceiling-mounted music boxes), listeners have been graced with the second offering from JOYFULTALK: Plurality Trip.
At once an extension and refinement of Crocker’s gonzo practices, Plurality Trip punches with a disorienting weight. Clearly drawing influence from contemporary dark trance and techno, Plurality Trip remains rooted in the outré swamps of krautrock and the tangled webs of modal jazz. Though heavier in tone that its predecessor, the weight is never debilitating. Rather, Crocker and Dicey roam the shadows with a thirst for possibility; the rugged tones stop short of suffocation, revealing an expansive core. Pulled into a half-sped ghettotech mirage, woozy on new-age overdose, the listener may be lulled into a key-run reminiscent of Mahmoud Ahmed before being pulled into a whirlpool of industrial jank. A heady and layered expanse, Plurality Trip presents multiple points of entry for those with ears poised for curious adventure.
CST134
180gLP / DL
Release Date: 24 August 2018
FULL ALBUM INFO AND PREORDER LINK HERE
RIYL: Laurie Spiegel, Harmonia, Kaitlyn Aurelia Smith, Suzanne Ciani, Harry Partch, Haxan Cloak