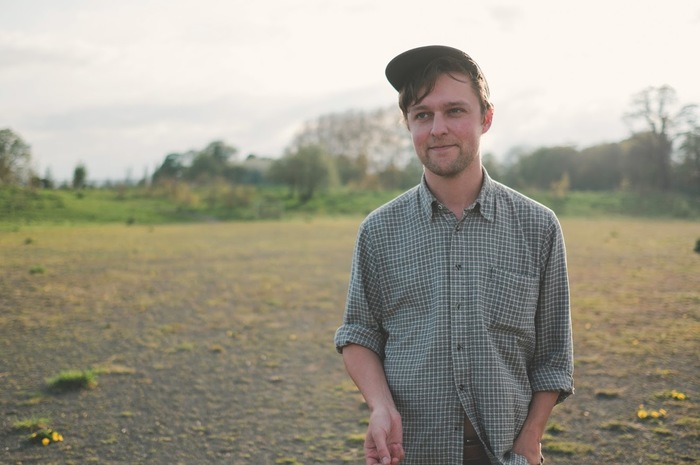 Singer-songwriter Joshua Burnside follows up his Northern Ireland Music Prize winning debut album Ephrata, with a brand new EP entitled All Round The Light Said, which is out now. Updating Irish folk music for the 21st century, Burnside is one of the first artists to blend traditional Irish and Ulster Scots folk sounds whilst weaving elements of world music, experimental rock, pop, Americana and electronica to create a sound that is wholly unique and modern yet firmly rooted in tradition.

The All Round The Light Said EP features four new songs. In lead-single “A Man Of High Renown”, he blends a joyous waltz complete with air organs and accordions with often violent and disturbing imagery, dealing with the shame of sins committed in childhood. The track was shared via Folk Radio.

The video for “A Man Of High Renown” was filmed in various prominant locations in Belfast, varying from the very modern (such as Titanic Quarter), to treelined streets (close to Van Morrisons’ famous Cyprus Avenue) , the buoys (outside Belfast Art College), the Crescent Arts Centre (where it begins), and a mixture of rural and urban locations. This was to create a patchwork of locations that fitted with the concept of Joshua’s music being reflective of Twenty First Century Ireland where the old and the very new collide in equal measure.

Quote from video director David Moody – “When planning the visuals for Man of High Renown we wanted to ensure we not only represented the song accurately, but also Joshua’s style. The mix of urban and rural landscapes, alongside the modern and classical choreography, reflect what Joshua is doing with his music. We wanted the video to feel like a journey; the viewer starts off with Joshua as he prepares to play, and alongside the dancers you get to explore these massively juxtaposed locations. The piece ends and you feel almost like you have transcended time as you explored all of these Irish vistas.”

Following the release of Ephrata Joshua Burnside has had a busy year clocking up four million plays on Spotify, with two sell out London shows, appearances at International festivals including Reeperbahn and The Great Escape. He performed for Folk Alliance and the British Music Embassy at SXSW 2018, where he was chosen by NPR as one of the festival highlights – “Burnside’s sound surges with real force… an intoxicating bundle of frayed nerves and woozy intensity.” He also played a 6 Music Fringe event during the recent BBC Big Weekend.

Whilst he creates songs that are understated yet passionate and heartfelt, he is not afraid to tackle difficult subject matter. On the back of winning the Northern Irish Music prize and his controversial political track calling for peace “Red and White Blues” (which he was stopped from playing during a live session for local a BBC station as it name checks the DUP), he was invited to play for President Bill Clinton at Belfast City Hall at a private event to mark 20 years of the Good Friday Agreement on 10 March 2018.

He has also had extensive radio play and support from the likes of Guy Garvey, Tom Robinson, Tom Ravenscroft, Lauren Laverne, Huw Stephens and Phil Taggart. Joshua performed at the Atlantic Sessions in Portstewart, as well as the music trail for Other Voices in Dingle in December
The All Round The Light Said EP features four new songs. In lead-single “A Man Of High Renown”, he blends a joyous waltz complete with air organs and accordions with often violent and disturbing imagery, dealing with the shame of sins committed in childhood; “where the dusty garage floor, along your soft skin tore.”
“Rearranged” has a more straightforward message. A self-confessed technophobe, Burnside deals with the effect of the Internet and social media on mental health in this simple finger-picked ballad recorded at home in Rostrevor.
In “Northern Winds” the full band is recruited to recreate one of Burnside’s most energetic and popular tracks. Recorded on analogue at Analogue Catalogue studios in Rathriland, Co.Down the song borrows imagery from Oscar Wilde, layering multiple vocal lines continuously and repetitively to hypnotic effect.
“Paul” is a return to the electronic experimentation of earlier works, sampling noises from the kitchen for percussion that click and crunch above a harp, distorted organs and vocoder.
A multi-instrumentalist, Burnside plays most of the instruments on the EP but was also joined by a number of collaborators and producers with whom he’s worked with over the past few years, most of whom have their own solo projects. These include his brother Connor on drums and percussions, Clark Phillips on bass and Sarah Martin on trumpet.
Always inspired by his travels around the world, where Ephrata was inspired by a stint in South America, he went to Indonesia in December 2017 to start work on recording his second full-length studio album, due out later in the year.