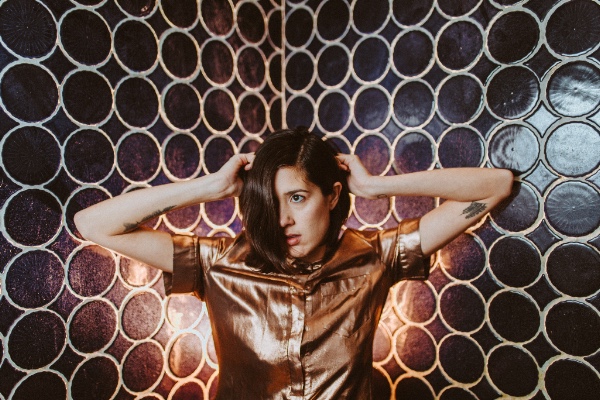 “Half Waif on defiant form and using the full breadth of her songwriting talents.” – 8/10, Loud & Quiet (Album of the Week)
“In Half Waif’s quest for some kind of calmness they’ve actually made an album that, inwardly, burns furiously.” – **** NME
“This record is a seamlessly beautiful and intoxicating affair.” – 8/10, Clash
“As raw & organic as the tender subject matter she brings to light, Plunkett’s music is bracing in its nakedness.” –GoldFlakePaint
“Shimmery, glittering hypnotic pop showers this intimate new album… Breathless imagery with dynamism.” – Aesthetica
“A striking album of beautifully rendered and deeply layered synth-pop.” – 7.8, Pitchfork

Ahead of their UK tour this September, Half Waif has shared a brand new Kate NV remix of “Keep it Out,” the first single from this year’s album, ‘Lavender’.

Electronic experimentalist Kate NV recently released her new album on RVNG Intl. and now the Russian producer has reimagined“Keep It Out,” taking it in a minimalist and surreal direction.

‘Lavender’ was co-produced by David Tolomei and mastered by Heba Kadry. It is available now via Cascine –https://lnk.to/hwlavender.