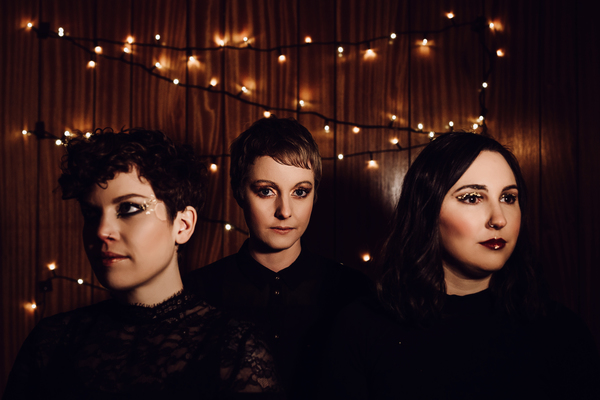 Haiku Salut
Share video of new single “The More and Moreness”
Taken from forthcoming album
There Is No Elsewhere out on 7 September 2018 via PRAH
Following the announcement of their forthcoming album There Is No Elsewhere via PRAH Recordings on 7 September, Haiku Salut share the second single “The More and Moreness“. The track sees the Derbyshire trio working again with Glastonbury Brass, with an ambitious interweaving of electronic and organic, natural and unnatural with the triumphant warmth of a brass band in full flow. The video was shot by their friend and collaborator, fellow Derby-based artist Grawl!x (aka James Machin), and sees them go on a covert mission in the local countryside.
The video was premiered via Clash, who wrote; “Matching post-punk to electronics and so much more beside, their work moves from soothing synth-addled ambience to brisk sonic abstraction. New song ‘The More And Moreness’ uses short cyclical patterns to build up into something imposing, a deft, beautifully pieced together work.”
Sophie Barkerwood from the band explains more about the track and video:
“The More and Moreness” started life as the soundtrack for an ice-cream van on the North-West coast. We were asked to write something illuminating for a travelling art exhibit and the bones of this song are it. It used to have a whole different twinkly introduction. A dead music box, in a dreary seaside town, coming back to life. The end section with the accordion loops and the brass band were written very quickly, I barely remember how that came together. One day it wasn’t there and then it was, in all its moreness.
In January 2017 we travelled to Somerset to record the brass sections with Glastonbury Brass, they were amazing to work with. Brass band in winter, a feeling I can’t quite place, belonging or pride? We went for a drink with a few of them afterwards and it was warming to hear about their community.
We wanted to continue the sense of belonging and solidarity in the video and decided to work with with our longtime friend and collaborator James Machin from Grawl!x. The video is an inky dark noir, we play a group of revolutionaries working together to bring an explosive change to the World. Much like the brass band, the revolution is bigger than the sum of its parts.
Video director, James Machin (Grawl!x), said; “The premise came from a short film I wrote a few years ago. We then combined that with the idea of Haiku as a band of revolutionaries, which I thought was quite a striking image. Mainly, the theme relates to the album in that it’s about community resisting oppressive bullies.”
Haiku Salut consists of multi-instrumentalists Gemma Barkerwood, Sophie Barkerwood, and Louise Croft. Between them, Haiku Salut play accordion, piano, glockenspiel, trumpet, guitar, ukulele, drums, and melodica. Their music also features electronic elements, which they refer to as “loopery and laptopery”. Influenced by the evocative film soundtracks of Yann Tiersen and Benoît Charest, the genre-melting electronica of early Múm, and the impressionistic writing of Haruki Murakami, the band released their debut albumTricolore in 2013, to critical acclaim, which was followed in 2015 by the equally acclaimed Etch And Etch Deep.
There Is No Elsewhere, is Haiku Salut’s first new material since They Gave Me A Lamp, their collaboration with Public Service Broadcasting, which featured on the PSB’s top five album, “Every Valley”.
Haiku Salut have announced a one-off live show featuring a robot orchestra and self-playing instruments – and a tour of their acclaimedLamp Show (in which a stageful of vintage lamps are programmed to flash, fade and flicker in time to the music) to follow in the autumn. The trio will be taking part in The Hexagon Experiment at the Centre For Life in Newcastle on 10 August where they will be exploring creativity in the age of robotics and artificial intelligence.

Haiku Salut
There Is No Elsewhere
Tracklisting:
1. Cold to Crack the Stones
2. Occupy
3. For Twinklr
4. The More and Moreness
5. Bow Wood
6. We Are All Matter
7. Choke Points
8. Nettles
9. I Am Who I Remind You Of
10. Shadows