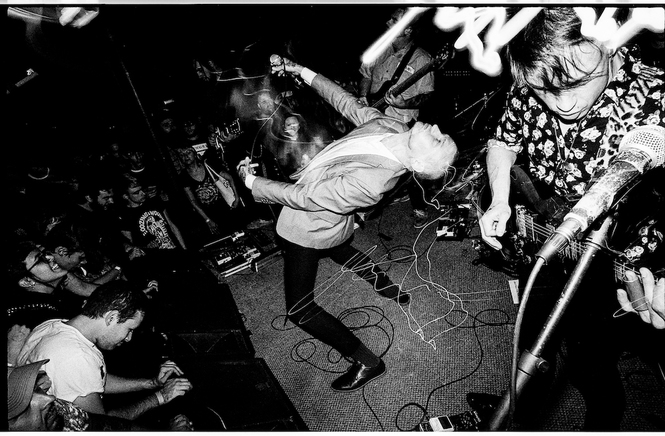 DAUGHTERS SIGN WITH IPECAC RECORDINGS, AND RELEASE THEIR FIRST NEW SONG IN EIGHT YEARS:
“SATAN IN THE WAIT”

Daughters, “the art-grind-turned-noise-rock mavens” (Decibel), have signed with Ipecac Recordings, sharing new song “Satan in the Wait”, from an as-of-yet unannounced, but planned, 2018 release.

Coyly commenting, vocalist Alexis Marshall said, “Pleased to bring all you lovely people: ‘Satan in the Wait.’ The first new Daughters song in just more than eight years is an indication, of sorts…”

“As longtime fans of many of the albums Ipecac has released, we are proud to be a part of their roster,” says guitar player Nick Sadler. “We are looking forward to getting back on road and playing new songs.”

“You don’t often get a chance to work with bands that you are already fans of,” added Ipecac Recordings Co-Founder Greg Werckman. “We are thrilled to have Daughters join the Ipecac family. A perfect fit and I guarantee the wait was worth it!”

Daughters are vocalist Alexis Marshall, guitar player Nick Sadler, drummer Jon Syverson and bass player Sam Walker. Following the release of their 2010 self-titled album, the band took an indefinite hiatus, returning in 2013 for a pair of sold out hometown shows in Providence, and a subsequent smattering of live dates in the intervening years, including joining Dillinger Escape Plan for their final live outings in December of 2017. Daughters have been hailed for their visceral performances, both live and on record, with Pitchfork describing them as “manic” and “pummeling” and Punk News pointing to their “frantic energy” and “spastic urgency.”

Along with news of the band’s signing to Ipecac and the release of their first new song since 2010’s self-titled album, Daughters have announced a five-date North American trek for this Autumn, with stops in Brooklyn, Los Angeles, San Francisco, Denver and Chicago. Tickets for the shows are on sale now.