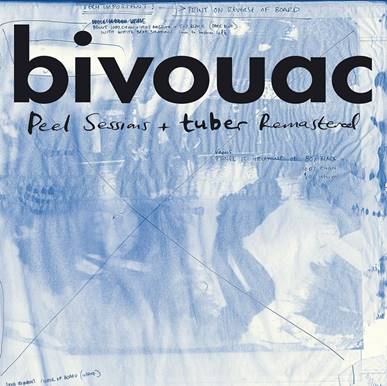 Bivouac did everything a 3-piece alternative rock band from Derby, who grew up on a steady diet of Husker Du, Sonic Youth and The Pixies, could dream of doing in the nineties. They released a string of records on cool indie label Elemental, recorded sessions for John Peel, played with Fugazi and Jesus Lizard, danced onstage with Nirvana, signed to a major label and split up. They’d began in 1992 and were over by 1996, but in that brief period, Bivouac crafted some essential, skewed and fuzzy tuneage that has endured and lingered on the cult fringes of alternative rock, remember fondly by those that were there as the band got on with the rest of their lives.

Then in 2016 they returned. It’s all Stewart Lee’s fault. Sometime that year the stand-up comedian, writer and director wrote a Guardian column that mentioned Bivouac. This brief mention was read by the good people who organise Gigantic, the popular nostalgia festival in Manchester who were fans of the band, who promptly asked the band to play that year.

“What shall we wear?”, that’s the first thing that drummer Antony Hodkinson said in response to the question of ‘shall we do some gigs after not playing for 20 odd years?’,” explains singer and guitarist Paul Yeadon. “And that was pretty much the spirit of the few shows we played together thereafter! We made a racket (with earplugs this time), celebrated the folly of youth, grown men cried, people travelled from Scandinavia, Europe and America. It was very humbling…we planned a few more.”

All of which leads us to 2018, where the band have indeed planned a few more. This year marks the 25thanniversary of ‘Tuber’, their debut album, and to celebrate such an event, this September 7th sees the release of a beautifully presented double vinyl reissue. Remastered by Paul Yeadon himself, the album is coupled with the first official release of the two sessions recorded for John Peel in ’92 and ’94 and issued through the band’s own label Thanks Capitalism in a limited run of 500 copies.

“Tuber was recorded on a farm in Warwickshire, we played a lot of golf on the then cutting-edge Sega Megadrive,” remembers Paul.  “At this point we had played a lot of shows and still liked one another, we were match fit and well-rehearsed. I think the combination of being confident at what we were doing but still not being really aware of why or what we were doing, (the needless pouring and scab picking would come later) made for a heartfelt and naïve record. Simplistic and uncontrived.”

And of the Peel sessions Paul remembers…

“We all grew up listening to Peel. It’s a cliché I know but I listened under the bedclothes on an AM radio to his show in the early 80’s. The music he played me then still defines a large percentage of my musical taste. To be part of that legacy is still really humbling, we are very proud to release the Peel sessions. I remember him playing us as I walked across the Reading show grounds, puffing my chest out!  He kindly supplied us and our labelmates AC Acoustics with beer from the VIP tent cos we were skint, we did awful radio interviews with him and he had us do three sessions. It really was a dream come true.”

You can pre-order the vinyl here: https://www.pledgemusic.com/projects/bivouac-tuber-expanded

Catch the band live at the following dates where they will be playing ‘Tuber’ in full.