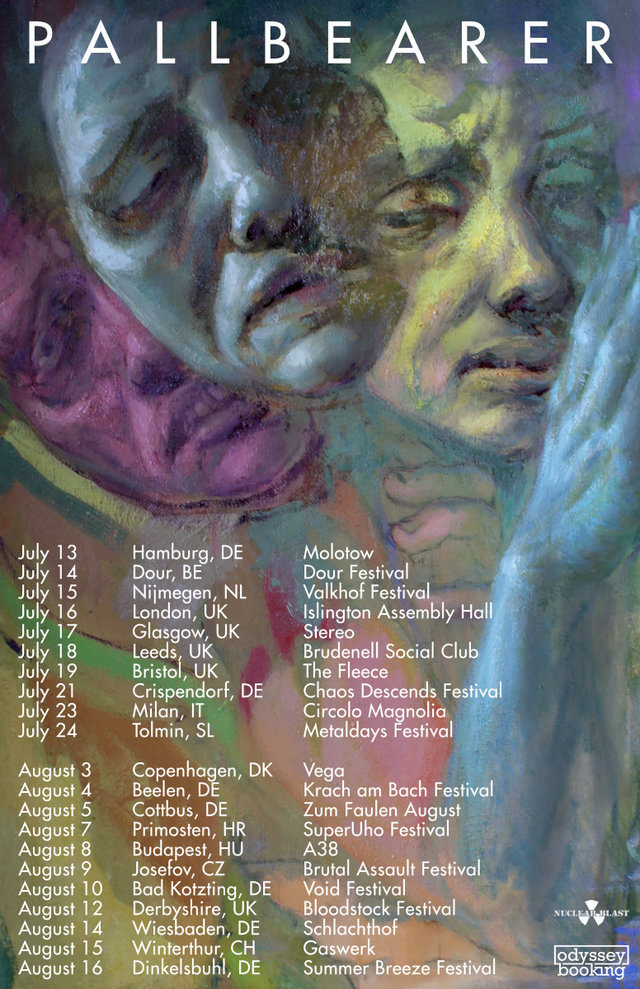 Ascending Arkansas progressive doom quartet Pallbearer recently released a new track titled ‘Dropout’ – their first music released since their latest studio album ‘Heartless’ back in March 2017. The track is the the 53rd instalment of the Adult Swim Singles Program. The band have now teamed up with Audiotree to record a special live video for the track, which can be viewed online, here:  https://youtu.be/Qq1pWl-ObjE

Pallbearer will be gracing our UK and European stages this summer for a run of club shows, on top of several previously announced festival appearances.

Kicking off in Hamburg, Germany on July 13th – this run will take Pallbearer across eleven countries for 21 club/festival shows, concluding on August 16th at Germany’s Summer Breeze Festival in Dinkelsbuhl.

The band commented:
“We’re excited to once again be heading over to Europe and the UK, and we might even be playing a handful songs from our catalogue that have never been performed outside of the US before!”

Dates are all on sale now:

‘Heartless’ achieved widespread critical acclaim in 2017, landing countless impressive ‘end of year list’ scores such as the #1 ‘Best Metal Album’ slots at The Quietus and Heavy Music HQ. Several of the achievements are listed below:

Initially formed in 2008, Pallbearer grew from the fertile underground metal scene of Little Rock, Arkansas – releasing their debut full length ’Sorrow and Extinction‘ in early 2012. The record made an immediate and immense impact on die-hard doom fans and metal critics alike, also forming the four piece fans outside of the metal scene. Hailed by Rolling Stone as the #1 metal album of 2012, the album also received the coveted ’Best New Music‘ stamp of approval from Pitchfork and landed the band on end of year lists at SPIN and NPR.

Their formidable sophomore record, 2014‘s ’Foundations Of Burden‘ featured on countless critic‘s end of year lists and cemented their reputation as an unstoppable and emotive force – driving doom beyond its imagined limits, carving themselves an entirely original path through the realm of heavy music. The record charted in the Billboard Top 100, achieving Pitchfork‘s ’Best New Music‘ accolade and Decibel‘s highly honoured ’Album Of The Year‘ award.