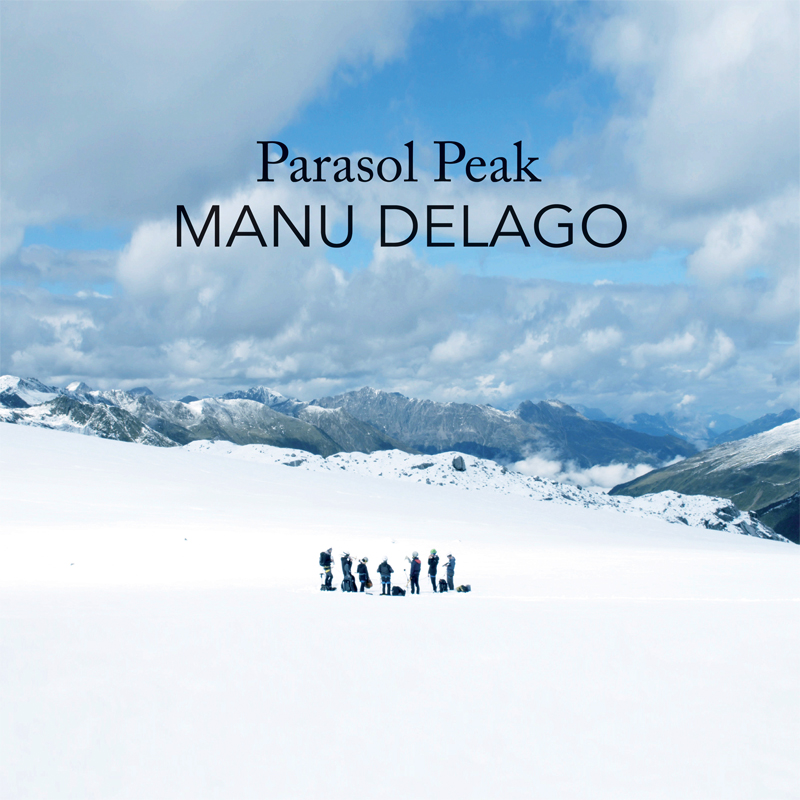 Out September 7th
via One Little Indian Records

“Every simple ingredient bears weight and serves a purpose, making the song the kind of subtle sleeper that burrows into the subconscious as it settles the nerves.” – NPR

Pioneer of the hang (handpan), captivating musician Manu Delago has announced the forthcoming release of a unique and awe-inspiring film and accompanying album, Parasol Peak out September 7th, in which Delago leads an ensemble of 7 musicians on a mountaineering expedition in The Alps. Along the way, the group perform a collection of brand new compositions in different locations, at varying altitudes. Today, the enigmatic artist reveals the first piece of music to be aired from the film, title track ‘Parasol Peak’.

The Austrian-born composer was discovered by Björk, who first invited him to perform alongside on her Biophiliatour. He is now a fixture of Björk’s live lineup and has also toured with The Cinematic Orchestra and Olafur Arnalds. Further, he earned a Grammy-nomination for his work on Anoushka Shankar’s album Land of Gold, performed Hang on Poppy Ackroyd’s latest album ‘Resolve’ and appeared as a soloist with the London Symphony Orchestra.

It is for this reason that the musician spends a great deal of his life on the road and in studios, collaborating with various artists as well as writing, recording and performing his previous two critically-acclaimed electronic-driven albums Silver Kobalt and Metromonk. This was how Parasol Peak became an exercise in the artist removing himself from studios, tour busses and laptops, and seeking to compose and perform both within and as part of nature, using only totally acoustic instruments.

Delago was not only inspired to incorporate the ensemble’s natural surroundings in The Alps, but also the percussive sounds of the group’s climbing gear. Delago comments: “Of course performing on acoustic instruments has been done for thousands of years, so I wanted to add an extra component – nature, or more precisely the Alps. I wanted to utilise our surroundings by incorporating lots of percussion sounds like trees, water, little rocks as well as the gear that we were carrying, such as helmets, carabiners or ice axes.

“In general, I find limitations inspiring and in the case of Parasol Peak I was limited to a fixed ensemble of 7 musicians. The different locations also brought various limitations, which affected how I composed the music. At some locations we were vertically aligned and couldn’t see each other. At others we couldn’t hear each other, or we were trying to survive while playing.”

Director and producer Johannes Aitzetmüller knew that the expedition would be one of his most difficult shoots yet. He comments: “Because I know the mountains and the situation I knew I could handle it, but what about the rest of the crew? How long can we shoot and how many times can we film the same performance over and over again in these conditions?

“On almost every location we faced a tough climb first, then very cold conditions (physically and also playing), snow, installation time of the audio, instruments out of tune and finally – the shooting. We sometimes could film only 2 takes, because the instruments were out of tune again, or the fingers too cold or the icy wind blowing too fast. The audio engineer, Michael Reisigl, installed a network of recorders, cables and microphones all over the rocks. On the right and left side there were sometimes more than 50m of vertical rock – so falling was no option. It was crazy how he performed. Further, we knew that the crew shouldn’t wait too long doing nothing because of the cold, the motivation and the instruments. And I knew that the filming had to be perfect first time – there won’t be another chance.”

The expedition posed life-threatening conditions for the ensemble, which at times had Manu questioning the project. “There were several moments of physical struggle and anxiety in the group” says Manu, “but that makes playing music together even more emotional”. A drastic unseasonal temperature drop causing heavy snowfall complicated the journey further and made for a bigger challenge musically, with the group performing in exposed locations at freezing temperatures.

“There were definitely moments when individuals in the group would have turned around and left the expedition” Manu admits. “But because we could only do it as a group, we had to strongly support each other. We had to help each other carrying instruments and gear, as well as help each other in overcoming anxieties and exhaustion.”

The result of the struggle that the group endured is a completely rare, once-in-a-lifetime piece of work – both stunning visually and remarkable musically. The album could very much sit wonderfully amongst the contemporary classical giants of the present, but there is no escaping its distinctiveness – with flecks of European folk embedded in the brass and accordion melodies, as well as prog drones performed on the strings and handpan, ornamented by taps and whistles from various natural sources. Sonically, without the visual, the evidence of nature is present throughout.

“For most of us it was physically the hardest thing we’ve ever done” Manu comments, summarising the journey. “But it was an incredible feeling to reach the summit and overcome those challenges. More than anything – the whole expedition was simply an incredibly connecting experience for the ensemble.”