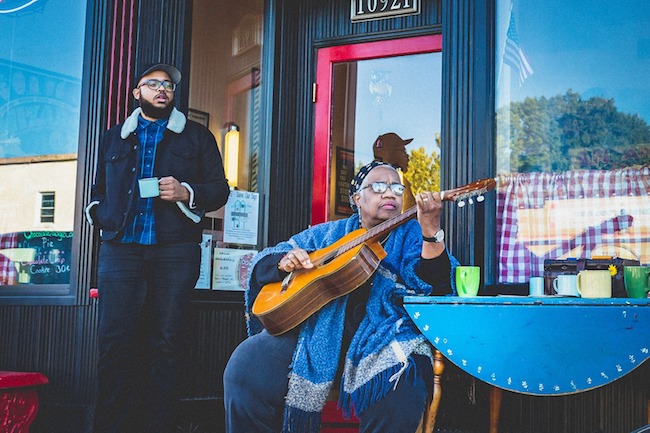 Kansas City mother and son duo Madisen Ward & The Mama Bear will release their brand new, six-track EP ‘The Radio Winners’ through Glassnote Records on 27th July. ‘Everybody’s Got Problems’, the second song to be unveiled from the EP is available today (watch the video below). ‘Childhood Goodbye’, the first single released from the new EP was warmly received upon its release in March 2018, being premiered by Jo Whiley and playlisted for three weeks on BBC Radio 2.

“It’s been a unique and refreshing experience, exploring different ways to make music while remaining true to our own creative instincts,” reflects Madisen. “We’re happy to present you with ‘The Radio Winners’. A six track EP we hope you’ll enjoy! This video of our song ‘Everybody’s Got Problems’ shines a little bit of light on where we are now. On the main stage, backstage, and even our “original stage”… the dining room. Thank you!”
‘The Radio Winners’ track listing:
Side A
1.    Childhood Goodbye
2.    Everybody’s Got Problems
3.    Walk In The Park
Side B
1.    Mother Mary
2.    Hell and Back
3.    Family Treason
Madisen Ward & The Mama Bear released their debut album ‘Skeleton Crew’ to widespread critical acclaim and a UK Top 50 chart position in 2015. The duo made numerous TV appearances, including The Late Show with David Letterman, Later… with Jools Holland, BBC Breakfast News and toured across the US, Canada and Europe. Performing at End of the Road, Bonnaroo Music Festival and Newport Folk Festival, they also supported the likes of The Tallest Man on Earth, Sufjan Stevens, Pixies, Rodrigo y Gabriela and Old Crow Medicine Show.
Back in the ’60s and ’70s, Ruth Ward was a gigging folk and soul musician in the Midwest, who even managed to put out a record. But those musical aspirations were set aside once family came into the picture. “My mom started to become a fan of the things that I was writing. She would tell me, ‘Hey, I’m gonna take a break during this show. You should go up and play a couple songs,’” Madisen said. “It just kept blossoming from there. I started playing on the songs that my mom was doing, she started playing on my original songs, and the songs just started to take shape more and more and kind of almost develop their own sound. It wasn’t so much her taking a break anymore, it was just the two of us going up there and playing.”
This blurring eventually became popular enough that the two were playing serious gigs. Eventually, they came to a crossroads. That was the beginning for the mother and son folk duo. The two furiously went to work, writing songs and touring to get their music out. Aside from the passion that came from songwriting and hitting the road, perhaps the greatest joy for the 26-year-old Madisen is giving his mum a second chance.
Pre-order ‘The Radio Winners’ EP: http://smarturl.it/TheRadioWinners
www.madisenwardandthemamabear.com