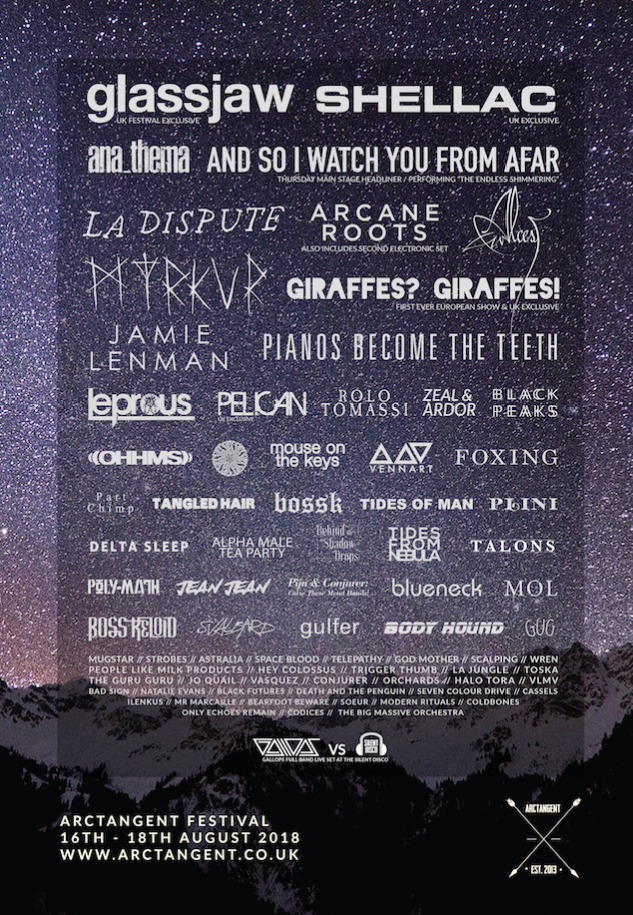 ArcTanGent Festival have today announced 10 new bands for the 3 days festival, set on Fernhill Farm, 16th-18th August 2018 to join headliners And So I Watch You From afar, Glassjaw & Shellac.

Renowned Danish composer and classically trained multi-instrumentalist, MYRKUR will be joining the ATG Festival bill this year. Her recent full length, ‘Mareridt’ just won the Album Of The Year Award at this years Metal Hammer Golden Gods Ceremony. Their set will surely be one of the most talked about at the festival.

In true ARCANE ROOTS fashion, they will be doing things a little different this year, with a special Electronic show.

“Over the last couple of years, we have developed a healthy addiction to pushing our little boat out into the wider sea. At first it was tentative, but once we started releasing music without repercussion, it became something we soon felt we couldn’t be without. We began to open doors that had previously felt closed off to us and set about exploring music that we had never imagined being part of. Slowly, (very slowly) we managed to find some comfortable new ground. Nothing felt more rewarding than opening ourselves up to that risk and choosing to embrace everything that came our way, so at a farm near Bristol, we’d like to open that experience up to everyone else. It’s certainly still an experiment, and certainly still a risk, but i don’t think there is anywhere better than ArcTanGent to present these new and challenging facets of our band. “ Says ARCANE ROOTS

“All 80 ArcTanGent bands are now announced and for us, August really can’t come soon enough. Having Myrkur on the line up is going to add an extra dimension to what I’m certain is our strongest line up yet and I’m also very excited about the Arcane Roots electronic set, which I’ve been assured they’ve been planning and is going to be very special indeed. As always, I recommend people check out some of the less well known bands further down the line up – there is a treasure trove of amazing music waiting to be discovered!” says organiser James Scarlett.

ArcTanGent is proud to be part of the Association of Independent Festivals initiative where 61 festivals are pledging to be single use plastic free by 2021.