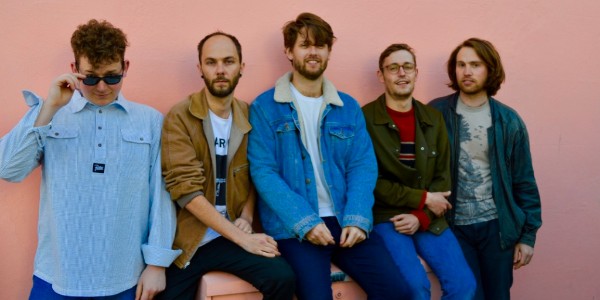 Brighton boys Animal House are back with another garage pop humdinger you definitely haven’t heard before. Their shiny new single, No Mamma, is out now.

The single is the first off their latest project Premium Mediocre. It is not lost on Animal House that they are comprised of five straight, white males who play a genre of music that is nothing new. They do, however, write a large quantity of what they are calling ‘Premium Mediocre’ songs; a whole new range of deluxe, home brand, high quality, low-budget ear worms. Forget Tesco Value, forget Sainsbury’s Basics, Premium Mediocre is your new family fave. The twenty-four songs that make up this project will be released fortnightly for a year. They self-produce and record the music in a musty rehearsal space and have it mixed by their buddy Enrico Berto. If you’re looking to put a bit of a spring in your step whilst downing your third coffee on the way to work, look no further than Premium Mediocre by Animal House.

No Mamma tells the story of some young bucks living in endless frivolity. Their aim is simply to have a nice time with their pals, falling slowly by the wayside as other friends their age carry on with the white picket fence dream. In other words, they are a bunch of slackers. No Mamma is yet another example of Animal House’s tongue-in-cheek approach towards their musicality. Nonsense, cheekiness and foolish yet on-point observational humour are quickly becoming their trademarks as well as their tight garage pop sound. The single is undeniably infectious from start to finish, sounding akin to that of Twin Peaks and FIDLAR’s upbeat, addictive signature styles.

Uprooted from the sweet sun in Australia, Animal House relocated to the UK to bring their casual charm onto European stages and into their tracks. Whilst they joke about their hedonistic adventures in the unique pseudo-culture of Brighton, the underlying message is solid; when it comes to entertainment, they’re not trying to impress you – the music – the energy, it speaks for itself. Having previously supported Courtney Barnett, The Wedding Present, The Preatures, Surfer Blood and Drenge to name a few, Animal House are ready to go. They have already received significant acclaim for their debut EP Sorry from the likes of BBC Radio 1’s Annie Mac, BBC 6 Music’s Steve Lamacq and Sean Keaveny, as well as NME, DIY and Clash.

Animal House’s latest single No Mamma is out now.